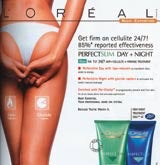 L’OrÃ©al is being forced to ditch its press and poster ad campaign promoting its cellulite-reduction product PerfectSlim, after the Advertising Standards Authority found its anti-cellulite claims to be false.

The ad features a near-naked woman wearing knickers with the strapline “Get firm on cellulite 24/7! 85% reported effectiveness”.

Earlier this month, the same ad received complaints from the Jewish community for being “offensive”. The community complained that some of the ads were displayed on buses that run in Jewish areas (MW last week).

The cosmetics company has been asked to remove all its poster ads and also been asked for a written assurance that no further bookings are to be made for the ad to run again in either the press or the outdoor media.

L’OrÃ©al has been advised to consult the Committee of Advertising Practice (CAP) copy advice team about devising a new ad campaign.

The CAP has ruled that it is not satisfied with any evidence relating to the effectiveness of a “topically applied cream” being able to reduce or improve the appearance of cellulite. It adds that the product name also implies a slimming or weight-loss effect and all references to PerfectSlim should include a clear disclaimer to say that the product has not been proved to aid slimming.

A company spokeswoman says: “L’OrÃ©al has confidence in its product, which has proved effective in reducing cellulite in 85 per cent of cases and was judged best anti-cellulite product in an independent consumer test. However, we are complying fully with the request from the CAP.”