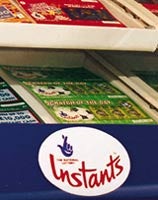 National Lottery tickets are to carry ads and top brands will have the chance to sponsor the Lottery under new rules proposed for the next licence, which begins in January 2002.

Advertising on some 100 million tickets sold each week and sponsoring the game is seen as an effective way of raising funds for good causes.

However, it is not certain whether all the funds derived in this way would go exclusively to good causes and not to Camelot.

Camelot, which was awarded the seven-year licence in December after a gruelling battle with Sir Richard Branson’s People’s Lottery, admits it will pilot a scheme to place ads on Lottery tickets. They will replace cross-promotions for other Lottery games which appear on the tickets.

A Camelot spokesman says: “It is something we have under consideration. There’s an opportunity to maximise returns and a great opportunity for brand owners.”

He refuses to name any interested brands, but Camelot has previously struck “marketing partnerships” with McVitie’s, Freemans and McCain through Camelot’s Enterprises division. However, these achieved limited success and the division was scrapped in 1998.

Camelot is to sign a pre-licence agreement with the National Lottery Commission (NLC) by the end of this week. The NLC says the licence is still being finalised, but will be based on the draft licence.