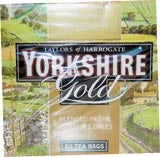 Love, the Manchester-based creative agency, is believed to have scooped the &£2m Yorkshire Tea account following a competitive pitch.

The agency is thought to have won the business following a final head-on battle with FCB London. The brand, which is owned by the family-run Taylors of Harrogate, has no incumbent. Agencies were asked to develop a campaign idea, rather than a one-off television ad, that would raise awareness and sales outside its northern core market, and emphasise the taste of Yorkshire Tea.

TV advertising, to break in 2006, will showcase the brand’s three variants/ Yorkshire Tea, Yorkshire Gold and Yorkshire Tea for hard water. Past work includes a TV ad developed by Bath-based agency South in 2003. It showed an animated journey through the Yorkshire Dales featuring the northern landmarks that are portrayed on the packaging. Yorkshire Tea also sponsored the ITV1 Sunday night drama Heartbeat until 2001 in a deal worth &£1.6m.

Taylors of Harrogate is the fourth-largest manufacturer of tea and coffee in the UK. Its rivals are Tetley, Unilever Bestfoods, Premier Foods and Associated British Foods.

Love was unavailable for comment as Marketing Week went to press. Agency partner Jonathan Rigby is a former managing director of FCB London.