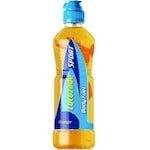 The two teams, who drew 1-1 at Anfield yesterday (15 August) have selected Lucozade Sport as their official “Sports Nutrition Partner” for the next three seasons, giving the clubs access to Lucozade’s 26 nutritional products before and after match days.

The deals mean that Lucozade – the GSK-owned brand – is now the official sports drink supplier to 19 of the 20 Premier League teams. Last week, Lucozade announced a simmilar deal with Chelsea.

Lucozade was the offical supplier of Manchester United until the end of last season.

Sports sponsorship is a popular form of marketing fo big brands. Exclusive access to player photo shoots can be used in marketing campaigns, while match tickets can be used for corporate corporate hospitality. Pictures of players using a sponsor’s product are broadcast worldwide and can further boost a brand.

Vinai Venkatesham, head of global partnerships at Arsenal FC, says: “Working with Lucozade Sport means that Arsenal players have access to trusted sports nutrition that’s proven to make a difference. We are delighted to be working together for the next three years”.