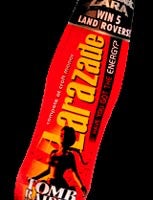 Lucozade Energy is to be temporarily rebranded Larazade next month to promote the summer release of the Tomb Raider film starring Angelina Jolie.

The &£5m promotion, which will cover TV, cinema and outdoor media, is understood to be the last Lucozade campaign featuring cyberbabe Lara Croft.

It will be the first time the Lucozade name has been changed in more than 70 years and it is expected that 40 million special-edition bottles will be sold during the promotion.

Lucozade Energy marketing manager Helen Gorman says: “Lara Croft is a heroine to millions of men and women and her dynamic and energetic nature fits well with the power of Lucozade Energy.”

An on-pack promotion will give consumers the chance to win trips to the real-life version of Lara’s home, Croft Manor, by finding one of 20 special icons hidden under bottle caps.

Each winner can then invite four friends to build a team of five to compete against a Lara Croft lookalike to win five, limited-edition Land Rovers with the best team winning all of them.

Ogilvy &amp; Mather, which created the ads for Lucozade, revealed last September that Lara Croft is to be dropped in favour of a change of strategy for the brand.

Lara Croft has been associated with Lucozade for more than three years. A new campaign is expected to break by the end of the year.