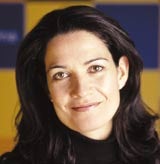 Lycos Europe has reorganised its top management in the UK after the departure of marketing and production director Nicole Morse.

Morse has been poached by Jetix Europe, the Disney-owned children’s television channel, as head of European marketing. The post was previously held by Nibs Dearsley, who last month joined Turner Broadcasting as UK marketing director, with responsibility for children’s TV brands Cartoon Network, Toonami and Boomerang.

Van Vroenhoven was previously Lycos Europe’s managing director for the Netherlands and then for France, while Sanchez Lopez was European business development director, responsible for developing and maintaining strategic business relationships.

In addition, Lycos Europe has named Adrian Moxley as head of international agency sales. Moxley joined the company in 2001, and previously worked for John Brown Publishing and EMAP.