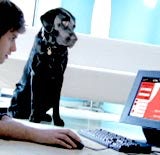 Lycos, the Internet search engine, launches its &£2.5m advertising campaign for its interactive online ‘flirting service’ later this month. Love@Lycos, aimed at 18- to 30-year-olds, allows users to create a personal profile and browse for potential flirt dates. In the ad, created by Leagas Delaney, a man arranges a flirt date on his computer, accompanied by his black labrador – the Lycos icon. When his doorbell rings, viewers expect to see his date on the doorstep. Instead there are a group of female pooches, including a pink poodle, at the door. The commercial ends with the dog grinning. The campaign, called Female Company, breaks on April 16 and runs for three weeks. A spokeswoman for Lycos says: ‘The ad reflects the nature of the product and is an irreverent take on having fun and flirting’. Media planning is through BBJ.