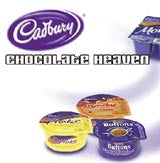 M&C Saatchi is tipped to win the £2m advertising business for the range of chilled desserts MÃÂ¼ller Dairy sells and markets under licence from Cadbury.

MÃÂ¼ller approached a number of undisclosed agencies with a brief to develop a campaign for the Cadbury desserts, which include Caramel and Dairy Milk.

The project is thought to involve mainly print and press advertising, with the possibility of some television work.

TBWA/London, which handles the MÃÂ¼ller account, declined to pitch for the task because of a perceived conflict with the Masterfoods business that it won last year. TBWA won the £14m MÃÂ¼ller account in October last year (MW October 7, 2004), after a pitch against M&C Saatchi, HHCL/Red Cell and Abbott Mead Vickers.BBDO.

The deal reinforced the position of MÃÂ¼ller as the UK’s leading dairy brand in the chilled dessert category and followed the appointment of Andrew Harrison as MÃÂ¼ller managing director (MW January 8, 2004). Earlier this month, MÃÂ¼ller doubled its spend for its Corner brand to £6m, when it launched a low-fat variant of the range.

Wrigley’s Airwaves has signed a multi-million pound headline sponsorship deal with British Superbikes team GSE Ducati. The three-year deal is the most high-profile sponsorship in Superbikes this year and will see the team, which took a year-long break from the sport in 2004, renamed Airwaves Ducati. Airwaves will be launching a marketing campaign based around […]

The Walt Disney Company’s board has elected president and chief operating officer Robert Iger (right) as chief executive to take over from Michael Eisner. Eisner is to step down in September, a year earlier than originally planned.

Asda is teaming up with The Walt Disney Company to promote healthy eating to children. The supermarket will run an on-pack prize draw over 30 different fresh produce items featuring Disney characters from The Incredibles film…