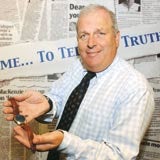 Kelvin MacKenzie, the chairman and chief executive of The Wireless Group, has demanded that Rajar admit that the diary system it used to measure radio audiences under estimates listeners to his national commercial speech station, TalkSport.

His calls come just weeks after Rajar announced it was dropping the GfK Mediawatch from its trials after the last round of tests showed it to be less accurate than the Arbitron pager and the Eurisko Media Monitor, which is a new entrant to the tests.

MacKenzie has “challenged” the radio body to admit that TalkSport has more than double the audience that the diary system reports. His decision to issue the call to Rajar revives his two-and-half-year battle to force the radio group to introduce electronic meters to measure the number of listeners. The row had settled down since MacKenzie’s attempt to sue Rajar for loss of earnings was struck out by the High Court before Christmas.

MacKenzie claims that under the GfK wristwatch tests the station had a weekly reach of 14 per cent, and under the Arbitron Portable People Meter a 17 per cent reach. This compares with just five per cent under the Rajar diary system. In 2003, The Wireless Group launched its own media survey using the GfK watch to prove that Rajar was under-reporting the station. It is rumoured to have invested &£2m in the survey.

Rajar plans to introduce electronic meters by 2007. The radio body was unavailable for comment as Marketing Week went to press.

Digitalisation is changing the rules of engagement, yet too many companies fail to hold our hands as we try to embrace the technology. By Robert Dwek

Companies have become obsessed with measures, believing them to be the most rational form of evaluation.

Lida, the below-the-line agency, has been appointed by BMW-owned Mini to handle its direct marketing account following a three-month review. Incumbent EHS Brann withdrew from the pitch earlier this year.