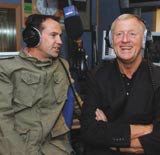 The battle for the number one spot in the competitive London radio market has so far been considered a two-horse race between Chrysalis-owned Heart 106.2 and long-term market leader 95.8 Capital FM. But the latest set of Rajar figures show that there is a new contender as EMAP-owned Magic leapt ahead of Heart to become the second most listened to station in the capital for the three months ending December 12, 2004.

Although Heart retains second place in London in terms of weekly reach – it still has 28,000 more listeners than Magic – these latest figures are a blow to its bid to regain the position of most listened to station in London, a title it briefly snatched from Capital just over a year ago only to lose it again some months later. Since the third quarter of 2003, Heart’s reach or share of listening has dropped and the fortunes of its owner, Chrysalis Radio, appear to be following suit.

Last week, Chrysalis, which also owns Galaxy and LBC and a music and publishing business, announced that advertising revenue was expected to a show a decline of three per cent for the first five months of its financial year starting in September last year. This compares with growth of 21 per cent for the same period the previous year. The fall in advertising revenue is attributed to a loss of audience in the third quarter of last year.

Adding to its woes, Chrysalis is understood to have recently had a &£100m offer for Guardian Media Group’s radio interests, which include Jazz FM, rejected because it was considered to be too low. It has been under pressure to consolidate its position in the market ever since rivals GWR and Capital announced plans to merge and become the UK’s largest operator with a 40 per cent share of the radio advertising market. The merger will put GWR and Capital, which have also both suffered from declines in advertising revenue for the last quarter of 2004, at an advantage in negotiations for advertising revenue. A move by fund manager Schroders to increase its stake in Chrysalis last week has led to increased speculation that unless the group consolidates its position soon, it will itself become vulnerable to a takeover or even a break up.

So now is not a good time for Chrysalis, which has long been viewed as a radio operator punching above its weight, to be accused of taking its eye off the ball at its flagship station Heart 106.2. A senior radio figure suggests that the programme team at Heart – under pressure to knock Capital off its perch – may have lost its way in the process. He says: “It seems like the station has become blind to what it is good at. It has forgotten where its strong points lie and just wants to take over.”

Chrysalis chief executive Phil Riley defends Heart, which was repositioned last autumn with a new image, logo and advertising campaign to attract a younger audience (MW September 16, 2004). He believes that this marketing push has failed to show in these latest results but will filter through into the next two sets of Rajar figures. He explains: “The truth is when you change the logo and image, you always risk losing listeners before you gain them. If we had done it earlier then it probably would have happened in the last quarter. There is never a good time to do it.”

“Unless you bring in new people, the audience atrophies,” he adds. “We had not done anything in the past five years to change the station and bring in the younger listeners. It is a fine balancing act when are you are trying to bring people in, as the audience will be chipped away at the older end.” The station has replaced breakfast show stalwart Jono Coleman with former Radio 1 DJ Jamie Theakston.

While Heart may have lost its way, London rival Magic has found its forte. The station, which plays easy listening music and does not have star DJs, has seen its reach grow from 1.4 million for the quarter ending December 2003 to 1.6 million for same quarter last year. But it is the growth in its share of listening hours that has propelled it into the top two. In the last quarter of 2003, the station had a 4.5 per cent share of listening, but this has shot up to 6.5 per cent in the latest set of results. The 29 per cent year-on-year rise puts the station just 0.1 per cent behind Capital.

Magic’s strong performance and listener loyalty is attributed to the consistency of its output since it introduced its “more music, less talk” policy last year. Vizeum head of radio Tim McCabe says: “Such a huge leap in hours means that they are doing what the listeners want and playing the right music to get them to tune in for longer.”

Some insiders point to the influence of former Capital Radio group programme director Richard Park, who has been working as a consultant at Magic since 2002. Park, who was also the “headmaster” on BBC1’s talent contest Fame Academy, was brought in to work on the music and presentation and was involved in the introduction of the new policy.

But while this latest set of results has certainly put Magic in the race to be London’s most listened to station, it remains to be seen whether it can maintain itsmomentum. EMAP managing director of programming Mark Story admits that it may not hold it continuously. He says: “When Kiss got to number one in the 15- to 24-year-olds [in terms of listening hours], we lost it and then got it back and then lost it and so on. We would expect it to be like that with Magic.”

But Magic’s sudden boost in listening hours and Heart’s short-lived stint as the most listened to station, briefly over-taking Capital, indicates that the London audience is becoming increasingly fragmented and the days of an undisputed market leader could soon be over. Smaller niche stations in London are set to benefit, while bigger mainstreams stations will find it hard to pull away from rivals in terms of reach and share.

Keith Pringle , managing director of 95.8 Capital FM, says that the challenge for the station is to be mainstream but with focus. But he believes that the station, which retains its number one position but saw its share of listening dip from 7.8 per cent to 6.2 per cent over the last quarter, will continue to lead the market. However, Riley believes that the top slot as the most listened to station is within Heart’s grasp, while Story is confident that Magic can take it.

So all eyes are on number one as the battle becomes closer than ever, but radio operators will do well to remember that strong competition comes from the BBC as well as commercial rivals.

MediaCom has been appointed to Volkswagen’s $430m (Â£230m) US media planning and buying account, as tipped in Marketing Week (January 6).

As many charities wind down their fundraising activities for the tsunami appeal, other causes are left counting the cost of the overwhelming pull of efforts on behalf of the disaster-stricken in Asia. By David Benady

Bacardi-Martini has shortlisted Campbell Doyle Dye and Fallon in the pitch for its £9m business.