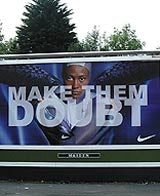 Outdoor company Maiden is to take its first step into the international market with the purchase of three Irish-based companies – Canberra, Network Poster Advertising and Outworks. The companies will be merged into a new venture to cover Dublin and all the major cities in Ireland.

Maiden has announced two initiatives for the Christmas/New Year period, which includes a new version of the money-back guarantee offer, “Pay for what you get” – which was rolled out in the summer – and “Christmas Inspiration”.

The “Christmas Inspiration” package includes a network of roadand railside 48-sheet posters, designed in such a way that they can be later linked to the shopping mall packages that Maiden offers. The initiative will run during the key selling weeks in November and December.

Earlier this year, Maiden claimed bookings for the first quarter were up by 22 per cent on the same period last year (MW March 29). The company attributed the rise in bookings to advertisers shifting media spend away from other channels, in particular TV.