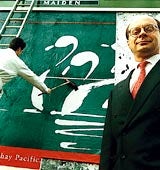 Outdoor company Maiden has made a strong start to the year with claimed bookings for the first quarter up by 22 per cent on the same period last year.

The upbeat results emerged against a background of slowing economic growth and the rapid loss of dot-com clients.

The company attributes the rise in bookings to advertisers shifting part of their media spend into outdoor and away from other forms of display media, in particular TV.

The figures have been released at the same time as Maiden’s preliminary results for the year ending December 2000, which show pre-tax profits more than doubling to £13m, on sales of £80.2m – up 19.2 per cent on last year.

Maiden chief executive Ron Zeghibe says: “Advertisers are increasingly using the outdoor medium, making it one of the fastest growing areas of advertising.

“Bookings are well ahead of this time last year. Even with growing uncertainty in the economy and a potential reduction in growth in advertising spend, we expect to be able to outperform the cycle.”