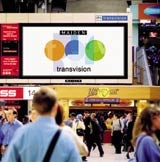 The BBC will provide the content for Maiden Outdoor’s Transvision news service sites at London train stations, after ITN decided not to renew its contract.

From this week, BBC News 24 will be shown on the giant screen sites at three London train stations: Victoria, Waterloo and Euston. Further giant LED screens are to be launched at Liverpool Street at the end of this month and at Charing Cross by April. Maiden is planning to launch the service regionally in Birmingham, Manchester, Leeds, Glasgow and Edinburgh in the second quarter of this year.

The BBC News marketing department has signed the deal in a bid to attract new viewers and to encourage take-up of its other digital services. When the Transvision sites are launched regionally, the BBC is planning a station-specific news service that will also run local news.

Transvision first launched at Victoria Station two years ago as a joint partnership between Maiden Outdoor and ITN (MW January 29, 2001). ITN originally supported Transvision to attract viewers to its ITN News Channel. The company decided not to renew the contract with Maiden after Carlton Communications and Granada took control of the channel and revamped it under the ITV brand last summer.