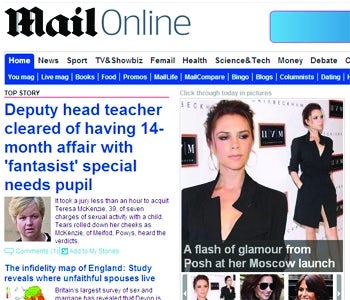 ABCE figures for February showed Mail Online achieved margin growth of less than 1% compared with January but regained the lead after visits to The Guardian’s site fell nearly 14% to 31m.

Telegraph.co.uk, which this week launched a crowd-sourced debate site, remained the third-most visited site, with 27.9m users, down 14%.

News International title The Sun received 21.2m users down marginally (0.48%) compared with January while sister title Times Online saw a drop of over 4% in users to 20.4m.

The report showed The Independent, which is reportedly still in talks about being bought by Alexander Lebedev, received 9.5m unique users and was down 1.83%.

Mirror Group Digital almost experienced a similar percentage drop as The Guardian and Telegraph, with a fall of almost 14% to 9.2m.

The Mail Online saw the biggest rise in online readers year on year, with a 68% increase, followed by The Guardian with 37% and The Sun.