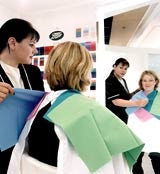 More than seven in ten (72 per cent) UK women between the ages of 17 and 74 use cosmetics regularly. However, there are wide variations in cosmetics usage between age groups, according to Taylor Nelson Sofres’ (TNS) European Toiletries and Cosmetics Database. The findings demonstrate that, although cosmetics use among European women tends to decline with age, the UK bucks this trend – usage increases in later life after a fall-off between the mid-20s and mid-30s.

Familiarity with cosmetics products is established at a young age, with 72 per cent of girls aged between 11 and 16 using make-up at least once during the past year. This rises to 80 per cent among 17to 24-year-olds. At the same time, about three-quarters of women aged over 55 have used cosmetics products in the past year and there is a significant increase in usage between the 55 to 64 and the 65 to 74 age groups. In contrast, usage is lowest among women between 25 and 54 (about 67 per cent). This reveals two distinct periods in British women’s lives when they are most concerned with using cosmetics.

Lip products are among the most widely-used cosmetics. Well over half (about 55 per cent) of over-25s say they use lipstick. This rises to about two-thirds in the over-55 age group. In addition, a significant minority of young teenagers (30 per cent) and 17to 24-year-olds (21 per cent) use lipgloss.

Mascara is popular among women aged between 11 and 54. However, among the over-55s mascara usage decreases significantly. This may be explained partly by the loss of eyelashes as women age. Usage of eyeshadow, however, remains quite constant across the 25 to 64 age range, only declining significantly among the over-65s.

Interestingly, the use of foundation is as high among the over-65s as it is among 17to 24-year-olds. TNS believes that there are related, but opposite reasons for this – over-65s may want to achieve a more youthful complexion, while girls and younger women may seek to appear older in order to obtain entry to pubs and clubs, or to attract boyfriends from a slightly older age group.

Concealer is used by 17 per cent of young teens, rising to about a quarter (24 per cent) in the 17 to 24 age group. This could be linked to the high incidence of blemishes and spots experienced during this period of physical development.

Not surprisingly products specifically aimed at the youth market, such as lipgloss and coloured nail polish, are barely used by the over-45s. However, usage of nail care products and eyebrow pencils is higher among older women.

The findings support the observation that girls are using cosmetics products from an increasingly early age: 11to 16-year-olds use more lipgloss and nail polish than any other age group, and 17to 24-year-olds use the highest proportions of eyeshadow, mascara and concealer.

A rather different pattern of cosmetics use emerges across Europe as a whole, with only 57 per cent of over-65s and just 55 per cent of under-16s using cosmetics products. In addition, there is a steady decline in the proportion of women using cosmetics as they grow older, contrasting sharply with the distinct upturn in usage among over-55s in the UK. This may partly be explained by cultural and social factors in local markets, as well as by climatic differences.

With older women becoming more concerned about their appearance, the TNS findings indicate significant use of foundation, tinted moisturiser and concealer to smooth the skin and create a more youthful and healthy looking complexion. The effective application of certain types of cosmetics can make them feel more confident and comfortable about their appearance. In contrast, young teens are increasingly looking for novel products, such as glitter-based lipglosses or eyeshadows and nail polishes in new colours and styles.

The evidence suggests that demand for high-quality anti-ageing products and fashionable cosmetics aimed at the youth market will continue to grow in the future. Avon, for instance, is launching a range of products in early 2003 aimed exclusively at teenagers, a lead which is likely to be followed by other major cosmetics companies. Similarly there are growing opportunities for targeting the “grey” market. Increased longevity, coupled with a desire to appear youthful, will generate demand for new and more effective products for older women during the next ten to 20 years.