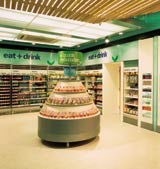 The retail environment has undergone dramatic changes over the past few years. Retailers have become much more sophisticated in how they attract consumers through their doors and encouraging them to spend.

In the past, few companies focused on the shopping experience; stores were rolled out to a standard format (the bigger the better); and value meant “pile ’em high and sell ’em cheap”. How times have changed. Retail has never been tougher, thanks to economic factors and greater competition on the high street. At the same time, consumer expectations of the shopping experience continue to rise.

“Retail is challenging at the moment,” says Russell Pinch, group creative director at design agency The Nest. “Now, more than ever, the in-store environment is not about design for design’s sake, but about using design to improve a company’s bottom line.” Difficult trading conditions mean that retailers can no longer leave anything to chance. A retailer must know exactly who it is targeting when opening a new store or revamping an existing shop in order to ensure that the cash tills begin ringing immediately.

“Four or five years ago, stores would only be refurbished if they looked out of date,” says ID Magasin chairman Siemon Scamell-Katz. “Now retailers are prepared to try new concepts, but not unless they can expect to achieve a return on their investment (ROI) in three months, compared to the previous average of three to five years.”

In the grocery market, Scamell-Katz says that until 18 months ago, retailers would simply open the biggest store possible on a new site. But now they have begun to look at the inhabitants near their chosen location and to provide a format strategy that matches their needs. Sainsbury’s, for instance, opened a trial store in September called Sainsbury’s Market, designed to help it better understand how to target more affluent consumers living in London’s Pimlico area.

The difference in layout and point-of-purchase (PoP) material is immediately apparent on entering the store. Fresh food counters, rather than the typical produce selection, greet consumers at the entrance, and there is a clear distinction between fresh food and grocery products.

Ultimately, Sainsbury’s Market doesn’t look like a traditional supermarket. This is enhanced by the use of luxurious PoP materials, such as wood, as well as the use of earthy colours throughout the store. “To keep costs low, we have used expensive PoP materials strategically,” says Andrew Cotterill, project manager in the format development team at Sainsbury’s. “For instance, the meat counter uses red marble around the edge, but the back wall behind the counter is tiled white.”

The number of PoP displays in the store has also been reduced – there are no hanging displays, for instance – and those that remain, such as blackboards by each counter, can be customised to reflect the character of each area.

Since its opening five months ago, Cotterill claims that the store is beating its financial targets. In particular, the way fresh food is presented has led to an increase in the amount consumers spend on this category.

Sainsbury’s is not the only retailer trying to offer a more targeted customer proposition through the in-store environment. In July last year, Boots redesigned its Holborn store in conjunction with design consultancy 20/20, to target urban working customers.

Two types of customer were identified: those on a two-minute fast-track errand, who wanted to buy a sandwich and top up their shopping; and those customers on a more leisurely shopping trip, but who still had only five minutes to spare. “The left-hand side of the redesigned store is targeted at customers on a fast-track shop. In this section, we have included very clear displays of food and drink, as well as the bestsellers among Boots’ traditional supplies, such as razors and tampons,” says 20/20 development director Yaron Meshoulam. “The emphasis is on presenting the products with absolute clarity.”

The rest of the store maintains this uncluttered feel but includes a mixture of charts and special offers to encourage consumers to linger. In addition, it features a central, eye-catching totem, which displays higher-margin products. PoP displays also feature quality materials, such as timber, while brightly lit overhead signposting makes it easier to locate products.

Although retailers are naturally hesitant to disclose performance data for individual stores, Meshoulam claims conversion rates are up dramatically in the Holborn branch and that the average transaction value has also increased. Boots plans to roll out the format to other urban areas, suggesting it has already demonstrated its efficacy.

Many high street retailers are realising that in lean times, multiple transactions and repeat business will only come from engendering customer loyalty and building on their existing customer base. “The retail mentality used to be shift as many units as possible,” explains Pearse McCabe, planning director at design company Fitch. “Now retailers are realising that they have to be much more aware of the market conditions and what consumers want.”

The Nest recently worked with WH Smith to develop a concept store in Guildford, aimed at challenging traditional retail philosophy. One of the goals was to differentiate clearly between “inspirational” and “functional” categories, in order to avoid conflict between those consumers who like to browse and those who know exactly what they want to buy. To this end, the retailer moved news and magazines to a designated browsing section at the back of the store, to prevent customers from feeling “tripped over” by other shoppers. Interestingly, the retailer reports that overall store traffic has since increased.

PoP displays have also been removed where unnecessary, including at the entrance to the shop, in order to give a much cleaner look to the store. The remaining PoP displays have been redesigned to have a greater visual impact. Blackboards on miniature easels display promotions in the stationery department, while customised displays direct customers to specific areas, such as books on gardening.

This also enables the products to speak for themselves. “Our focus was to take a human approach and to ask what we could do to bring the products to life and inspire people to buy,” says Alex Willcock, executive chairman of The Nest. “So we looked at using photography on the packaging and displays, to celebrate the products.”

Despite a reduction in product density and ranges of 15 to 20 per cent, customers have reported that they now feel there is more choice. In addition, WH Smith says it has seen an increase in sales and average transaction value, with double-digit sales increases in sections such as arts and crafts, cards and basic stationery.

Look with your hands

Another growing trend, both in in-store design and PoP material, is the use of interactive displays and features that encourage consumers to linger in a brand environment. “We recently completed a concept store for Lego. One of the key design aspects we created was a ’pick-and-mix’ wall of Lego bricks,” says McCabe.

In addition, products were signposted through large graphic representations, and children were encouraged to play with the products in a large area at the centre of the store.

In the telecoms sector, Orange now features interactive elements in its stores, to encourage consumers to use the data services on their mobile phones, which have a much higher margin than voice calls. To entice existing customers into its stores, Orange began work with 20/20 in May 2002 on a redesign of its retail outlets.

The new stores comprise three main areas, known as Shop, Recharge and Play. In the Shop section, for example, consumers are able to test phones, which are showcased on unusual-shaped pods. This differs from a conventional mobile phone store, in which dummy products are typically fixed to a wall.

Further interaction is encouraged in the Play section. In Orange’s Birmingham Bullring site, this concept has been taken even further. At the back of the store, there is a Greek theatre-style seating area, in which customers can play with the phones. Signage in the store is bold but minimal, and the colour orange is used throughout to act as a constant reminder of the Orange brand.

According to 20/20, the store has already generated significant results since its opening in September. In November and December, for instance, the Birmingham store beat its internal targets by 35 per cent, attracting twice as many customers as the second-biggest Orange store.

When marketers take the time to understand the mentality of their shoppers, redesigning a store’s layout and making clever use of PoP material can bring significant benefits to a company’s bottom line. With UK retailers fighting harder than ever to win consumer loyalty, there has never been a better time to be a shopper.