Mama Mio is aiming to raising awareness of the brand, drive sales of its skincare range and communicate its brand values.

The campaign will target a wide female audience and is expected to include press, outdoor, digital and social media.

Mama Mio began with products designed for women during pregnancy but has since extended the range “to meet the skin care needs of women at every lifestage”.

Its products can currently be found in over 700 stores in eight countries and 150 of the world’s top spas.

The agency was appointed without a pitch.

Sian Sutherland, founding partner of Mama Mio says: “2010 is already looking like a very big year for Mama Mio and we have a lot of brilliant things coming up that we need to shout about in our typically unusual way. Baber Smith is a great fit for us – growing fast and interested in everything new.”

Sam Jordan, managing director at Baber Smith adds: “The Mama Mio brand oozes confidence and charisma, so we aim to create a through-the-line campaign that will be delivered with typical Mama Mio irreverence.”

Cadbury has appointed CMW to develop and execute the Trebor digital strategy across its portfolio of gums and mints. 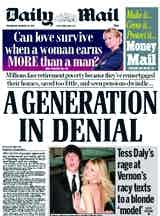 DMGT, owner of the Daily Mail and Metro newspapers and Teletext, has reported first quarter results that show revenue down 15% year on year to £482m.