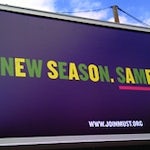 It is believed the Premier League club has sold 51,800 tickets for the current campaign, short of its 54,000 target.

MUST, angry by the debt current owners the Glazer family have saddled the club with, orchestrated season-long protests last time out and has vowed to continue with its effort to oust the Americans this season.

Duncan Drasdo, chief executive of MUST, says its campaign has “galvanised” opposition to the Glazers with many supporters opting for match by match application for tickets or a boycott of games “until the Glazers go.”

“This could be the tipping point for the Glazers ownership as season ticket demand no longer exceeds supply meaning the balance of power swings back towards the fans.

“This will make it very difficult to put ticket prices up next season especially while they maintain such a negative transfer spend at the same time as they continue to extract millions from the club’s coffers,” he says.

It is understood that Manchester United upped its marketing effort this summer to shift tickets because it feared sales could be affected by MUST’s campaign.

David Gill, chief executive of Manchester United, told Bloomberg: “”We’ve sold more season tickets than the capacity of most Premier League grounds. Our executive seat sales are on track as compared with last year in a different market.”