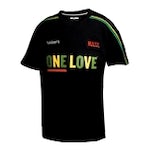 The group, which is looking to oust current owner the Glazer family, is launching a limited edition alternative team shirt “identical in quality” to Manchester United’s replica shirt, with all profit going to the British Heart Foundation.

The black, green and gold shirt displays the supporters trust’s “One Love” strapline instead of a corporate sponsor. It will retail at £19.99, which MUST claims is half the price of an official club shirt.

The group is also considering how the One Love brand could be used for other “appropriate” merchandising opportunities. It has previously sold T-shirts at the club’s Old Trafford home ground.

The move comes a week after it emerged that the Red Knights, the group of City financers looking to buy the club, shelved its £1bn takeover bid.

The group is said to have been put off by the £1.5bn that current owners the Glazer family are said to want for the club.

MUST backed the Red Knights stance, describing the £1.5bn asking price as a “ridiculous premium”.

Both MUST and the Red Knights are angry with the £700m debts the Glazer family has saddled the club with.

MUST has previously run press, digital and marketing activity.

Sainsbury’s is to launch the first branded food and drink channel on MSN in a bid to target mums.