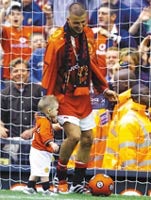 David and Victoria Beckham’s son, Brooklyn, may soon be wearing more than just a miniature version of his father’s Manchester United shirt when the club launches Mini Man United, a range of clothing and accessories for babies and toddlers, this summer.

The range is understood to form a major plank of the complete relaunch of all Manchester United-branded clothing and other licensed properties, which coincides with the start of the club’s 13-year deal with sports clothing giant Nike. Manchester United marketing director Peter Draper confirmed that the club’s Megastore retail outlet was also being refurbished.

The Nike-Manchester United deal goes far beyond the usual sponsorship arrangement between clothing companies and sports clubs. In addition to the rights to make and sell Manchester United branded sports clothing and equipment, Nike becomes lead licensee for the club, with the right to decide who gets to use the club’s name and imagery across all products. As a result, Nike is understood to have set up a wholly owned subsidiary called Manchester United Merchandising. Nike has declined to comment.