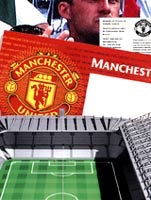 Football in this country is now big business. This season alone the Premiership’s 20 clubs will have a turnover of over &£1bn. No wonder they are beginning to recognise the worth of implementing CRM (customer relationship management) systems.

Historically, football clubs haven’t focused much on their paying customers. Prior to the Taylor Report, published in 1989 following the Hillsborough disaster, football fans generally had to endure a pretty uncomfortable experience – run-down terraces, poor facilities in the grounds and long queues for tickets.

Some argue that as a lot of CRM is to do with brand switching it has little relevance in football, where someone is unlikely to switch from supporting Liverpool to Manchester United on the promise of better customer service.

But Bill Hughes, marketing manager for Software For Sport, which supplies CRM Talent software to a third of Premiership clubs, believes football clubs still need to focus on fans.

“There is a danger of people switching from going to Chelsea to watching Chelsea on Sky TV,” he says. “They can also switch from soccer to rugby or other sports,” he says. “Children may be as happy watching the razzmatazz of ice hockey as watching Chelsea play. So football can’t be complacent about its relationship with customers.”

According to Hughes, Talent has brought together once disparate pockets of information within Chelsea football club – season ticket holder data, club shop transactions and so on – in a single database. “Talent enables clubs to profile fans in whichever way they want,” he adds. “It’s an integrated system of ticketing, CRM, merchandising and accounting.”

Hughes highlights the importance of keeping corporate customers happy because of the high revenue generated by box sales. “They can be brand switchers because they’re not all die-hard fans,” says Hughes. “The marketing director at BT could be asking: do I buy a box at Twickenham, Lord’s or Old Trafford? You haven’t got the same loyalty so you have to do a good CRM act with those customers.”

Elaine Clark, group IT manager at Chelsea FC, suggests that building up information on fans and corporate customers is helping the club to market other facilities available within the Chelsea Village complex, which includes a hotel and restaurant. Mail-shots can be sent out highlighting the fact that events such as birthdays and anniversaries can be held there.

CRM specialist Coranta has been providing a similar service to Software For Sport in its work for Rangers football club. Its CRM system, Profile, was initially introduced to improve ticketing. Peak demand for tickets at certain times of the month meant the club switchboard was inundated before key matches – peaks of over 3,500 calls a minute have been recorded on occasions.

As part of the CRM implementation, the club uses the services of a call centre so call answering has been dramatically improved. And with call centre staff able to see the caller’s profile on screen, customer service has improved.

Profile also allows the club to know who its most valuable customers are. The club can then offer appropriate rewards for loyalty by knowing what fans like specifically.

Smart card technology has also been introduced at the club. This enables Chelsea to see which season ticket holders have not turned up on match day, so empty seats can be re-sold. Smart cards also improve the ticket application process, saving the club the expense of paper-based mailing.

Rangers systems and technology manager James McGlynn says: “We [used CRM] to find out who our customers are and what they want. In the longer term, as a business and a club, [CRM] gives us a lot more stability, so we can ride out the highs and the lows you get on the pitch.”

The club now has 215,000 individual records on the database and can turn around general enquiries within 24 hours. It can also handle up to 20,000 calls a week – previously it could deal with only about 2,500 – and the club’s merchandising website also connects directly to the CRM system.

The value of CRM

McGlynn says: “The main measures of the value of CRM are market knowledge, database growth and a far higher level of service in terms of volume of calls. There has been a fairly significant hike in revenues just by using that wider market more efficiently. There are also some significant overhead reductions, particularly in paper-based admin.”

Nick Siragher, director at CRM specialist Hewson Consulting, says developments in CRM systems shouldn’t come as a surprise. “Sport is big business and the stakes are high. Fans might be loyal to their teams, but that loyalty may waver when it comes to buying merchandise.

“At the same time, fans are being subjected to CRM strategies by other organisations competing for a share of their wallets.

Siragher suggests that while clubs have the platform to develop CRM and are using technology to handle customer data more efficiently, actual strategies are vague.

Rather than focusing on loyalty, he believes CRM’s role in sport is to extend the relationship with fans.

“It’s about taking sport away from the event and promoting lifelong management of the customer relationship,” says Siragher.

“If the next three matches are two Wednesdays away and a Tuesday at home, you need something to keep those fans who can’t make mid-week games energised to support you. That is how I think they’re going to start to use CRM.”

Premiership football clubs are not the only sports organisations realising the benefits of CRM. Coranta’s CRM system is helping raise the profile of the June 2001 International Horse Trials at Burgie.

Coranta chief executive Gillian McAlister says it is using a similar model to the one applied at Rangers. Its CRM system is monitoring a merchandising website, telephone enquiries, ticket allocation, trade stand exhibitors and sponsors.

It hopes to increase attendance by turning the event into more of a local day out, not just an event for horse people. Burghie will offer a “Taste Of Moray”, highlighting products traditional to that part of Scotland. Another aim of this is to attract more local sponsors.

Sports Internet company Sportal.com has embarked on a CRM strategy aimed at improving communications with its registered users.

“It’s coming from the loyalty side of things and hopefully educating people about our service and new additions to it,” says John Gleasure, Sportal’s head of marketing. By analysing its database, Sportal aims to improve understanding of users’ preferences and hence offer them the most suitable content.

Despite the above examples, sport still hasn’t woken up to the fact that it’s more about the customer than the product. But the signs are there – certainly in football – that things are changing.

CRM is still in its infancy in a lot of clubs. Hughes is the first to admit the business models being developed are not as sophisticated as in other sectors such as retail. “It was pretty much the same at Sainsbury’s ten years ago,” he says, “when you walked in, paid for your shopping and walked out. The same sort of model is being used by clubs and it’s a few years behind the times.”

CRM is clearly beneficial for attracting sponsors and visitors; once clubs identify the spenders from the non-spenders, they can be more focused in their marketing.

Most interesting is the fact football clubs are starting to employ brand managers. And as marketers move from high-street retail into bigger clubs, business models will undoubtedly evolve. Developments in smart card technology mean data gathering will also improve a great deal – and as a result, CRM strategies in the sporting arena can only get better.