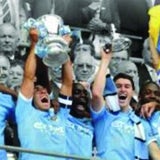 Pate will be charged with building the Manchester City brand across new territories, starting with the club’s three game pre-season US tour in July. The club already has a dedicated US site and there are plans for further local marketing actitivy around the tour.

Manchester City secured a UEFA Champions League place for the first time in its history this year after finishing third in the English Premier League and winning the FA Cup, which will help build its presence in Europe.

Pate will also be responsible for the club’s “digital expansion” strategy, working alongside head of digital Richard Ayers.

Last month the club introduced the first augmented reality membership cards and an app that allows fans to virtually lift the FA Cup.

Pate says: “I feel privileged to be part of a club which regards digital innovation as a core component to its marketing and communications disciplines.”