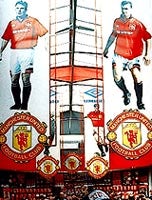 Former brand sales director Ron Gourlay will replace the managing director of merchandising with immediate effect, although Richards will continue to work alongside him for the next couple of months.

Spokesman Paddy Harverson says it has been a “difficult decision” to make.

He denied Richards resigned in protest over the job cuts, saying he took part in the review and was “happy to move on and try new things”.

Manchester United will team up with local companies across the world to develop and promote the club’s brand, rather than deal with all aspects of merchandising at its UK headquarters.

“It makes more sense to do it with local partners,” adds Harverson.

Manchester United has been the world’s richest football club for the past three years. Figures for the past financial year show a turnover of £110.9m, considerably ahead of Germany’s Bayern Munich on £83.5m.