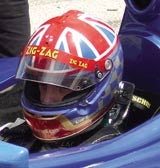 Racing driver Scott Mansell is attempting to emulate Alex Tew’s “Million Dollar Homepage” method of selling advertising over the internet – on his car.

Mansell, 20, is being hailed as a future Formula 1 driver and is competing in the US Indy Pro series this year – the equivalent of F1’s GP2 series.

To help fund the cost, he is selling ad space on his website for $100 (&£57) per 1×2.5 inch block. The twist is that alongside a presence on his Web page, advertisers will also get their logos on the car itself.

Mansell’s promoters claim that with the publicity surrounding the stunt and the fact that spectators get much greater access to Indy Pro series cars than they do at F1 events, prospective sponsors can reach an audience of millions for a relatively low cost.

Tew, 21, a student at Nottingham University, set up Million Dollar Homepage last year as a way of meeting the costs of his business management course. His website contains one million pixels, and is a virtual billboard where advertisers can buy space at $1 (57p) a pixel.

When users click on a group of pixels bought by an advertiser they are directed to the relevant homepage. The website intrigued brand-owners and in the first four weeks alone Tew sold $300,000 (&£172,000) worth of space.