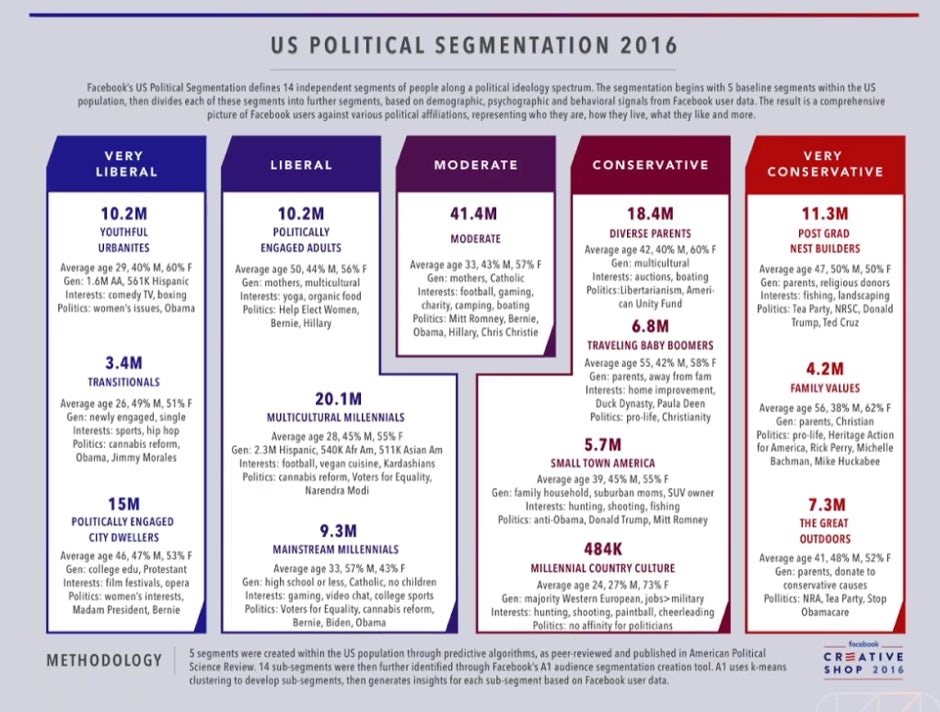 The recent surge in attention being paid to the Russian influence on American society via its use of social media has produced a stream of ever more amazing insights.

A few months ago the headline that Russian operatives were using Google and Facebook to destabilise America and undermine its democratic process would have struck most people as the stuff of bad fiction. But as US lawmakers continue to investigate Russian social media tactics it is becoming clear that the question is not a matter of ‘did they?’ but rather ‘how much did they?’ and the answer to that second question is ‘fuckloads’.

But among all the incredible stories of bots, fake news stories and some of the most disingenuous advertising campaigns in the history of marketing, it was a far more legitimate, strategic insight from Facebook that grabbed my attention last week. According to Buzzfeed, Facebook approached political parties last year with a segmentation of the American population (pictured above) that was widely used by the company’s sales team to encourage advertisers to invest in Facebook advertising.

My point here is not to suggest, as others have done, that this is somehow a salacious, underhand or even creepy way to classify American voters. In fact, my point is exactly the opposite. I think this is a very basic, but also very impressive bit of work from Facebook’s American marketing team.

Let us break down the approach, step by step, for all those marketers who lack a proper training in basic marketing or those who think that segments, like much of the traditional approach to marketing, are now ‘old hat’. You can learn from how Facebook has done this.

First, Facebook’s approach is what we call hybrid segmentation. It uses multiple data sources drawn from a combination of different types of consumer data to build its picture of the market. There is a combination of general attitudinal data (eg supporting marriage equality), behavioural data (eg donating to conservative political causes) and demographic data (eg 73% female).

Crucially, the Facebook team started with the attitude clusters, then moved onto behavioural indexing and then finally looked for demographic distinctions from the general market mean, rather than the more inane method of segmenting by age and gender and then making up a bunch of stereotypical bullshit about what this ‘segment’ probably wanted.

Remember all those marketing bozos who keep banging on about targeting millennials as a single homogenous group? That’s what happens when you start with demos and then try to attach similar attitudes and behaviours to everyone in that 20 million-strong group.

There are millennials in Facebook’s segmentation but, crucially, the data confirms that this is not one single homogenous group. Rather, there are three different types of millennial cohort when it comes to political activity and each has very different characteristics. There are also other segments, like the ‘transitionals’ for example, that are filled with millennial-aged voters but whose behaviours and attitudes preclude them from being given the ‘M’ label at all.

And you can be sure that, although the average age of segments like the ‘politically engaged adults’ is significantly greater than the millennial cohort, there will also be a smattering of millennial-aged consumers in these segments too. Neat demographic bullshit falls apart with a bit of empirical input.

That’s again important because Facebook has avoided another classic error that is made all too often by marketers: targeting prior to segmentation. It’s crucial to segment the total market before you target. Every possible target customer, even those you are unlikely to ever want to go after, needs to be inside the square and attached to a segment. Personally, I would have added non-Facebook users too as a single collapsed segment of voters, but I can appreciate why Facebook’s political vertical team were not keen to broadcast to all their clients the fact that 76 million potential target consumers do not use its service.

Now examine the names that Facebook have used to title their various segments. They provide clear evidence that this is a well-constructed segmentation and has been done by, dare I say it, some well-trained ex-FMCG and MBA veterans. I can smell it.

Naming is super-important because very rarely does anyone outside the marketing department read the portraits of the target segment or examine the detailed data. The segment name is therefore the one thing that everyone from the CEO to the sales manager uses during execution and must represent a quick and accurate amalgam of the main drivers and behaviours of the segment. That’s exactly what names like ‘youthful urbanites’ and ‘the great outdoors’ manage to achieve; they give you an instant insight into who this segment is and what drives them.

Note also that these are not names based on targeting but rather segment identity. Again, a common mistake is to name these segments after their attractiveness and use titles like ‘top priority’ and ‘gold’. The crucial challenge of segmentation is to base it on the market being profiled and not on the company doing the profiling. You need to finish the map before you plan a journey or it will go horribly wrong.

Similarly, you need to complete segmentation before you move to targeting to ensure the former will drive the latter. As my old marketing professor used to say: “We call it market segmentation because it’s about the market and not the company doing the analysis.”

Finally look at the number of segments. There are 14. Why 14? Because like any good segmentation there has been an attempt to cluster consumers into as small a number of segments as possible without over collapsing the segments and combining distinctive types of consumer into the same group. Using the data-mining technique of ‘k-means clustering’ enables Facebook to create the ideal number of segments, ie the smallest possible number.

Any more segments and the approach would be unwieldy and overly complex. Any less and some of the segments would break one of the prime laws of segmentation and contain significantly heterogeneous people in the same group – thus rendering the approach unreliable. A good segmentation collapses the number of segments as much as possible but does not collapse too much. 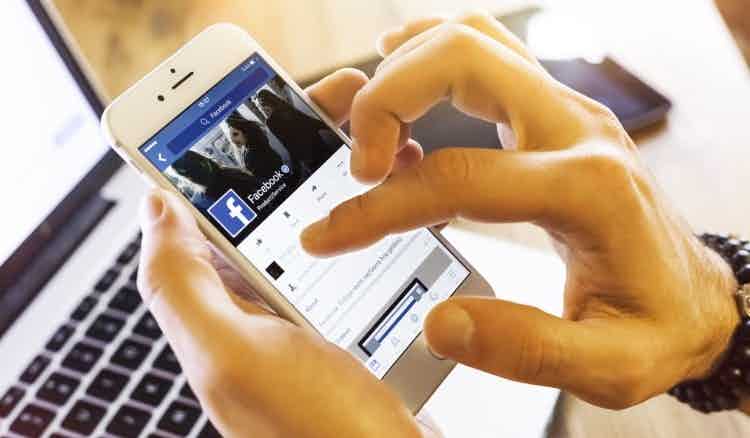 Because this is Facebook we also get another massive advantage with this segmentation. We can reach everyone. Usually a giant segmentation of millions of consumers now leads to compromises in the targeting and reach elements of the tactical execution. For example, we might buy 30-second TV spots for a right-wing political party on the show Duck Dynasty to reach ‘travelling baby boomers’, ‘small town America’ and ‘millennial country culture’. But clearly some of these customers might not watch the show or be watching on the night we run our ads.

Similarly, a significant proportion of this show’s audience might also lean left politically, thus representing wastage for our campaign spend. We pay for the whole audience even though only 40% might be made up of our target consumers.

With Facebook, however, we can be assured that we can continue to sub-segment this audience into even smaller targetable groups. You want travelling baby boomers that live in suburban Minnesota, own their own home and have a significant mortgage left on the property? Here are the names. You need to target millennial country culture voters who are female, unemployed and live in small towns with significant immigration issues? No problem.

That ability to slice, dice and then target down to the individual level is supremely useful when it comes to designing political messages that will press the right buttons as election night approaches.

As Brad Parscale, the digital director of Donald Trump’s election campaign admitted earlier this week, Facebook is fantastic at driving targeting messages at very specific segments. “When you’re trying to raise money, different people like different colours, people like different messages, [people like] long form, short form, pictures, images. You put those across each other and automate the construction of the ads, and your math goes up really fast.”

This is a fine bit of segmentation and something that most marketers should admire and learn from.

Of course, this kind of segmented approach was not a special one-off effort from Facebook for last year’s election. It is simply what one of their vertical teams – the one charged with selling political advertising – came up with and sold to local and national political advertisers last year. Right now, similar hybrid segmentations for other verticals like motoring, vacations and banking are doing the rounds in all of Facebook’s major markets including the UK.

While other media send media salespeople to sell media, Facebook sends experienced marketing executives who used to work in the industry they now target, armed with extensive hybrid segmentation data and a host of tactical suggestions to show how clients can make more money.

There is a great irony in all of this. While most digital marketers are obsessing over communications, exclusively tactical decisions (such as ‘how do I livestream myself to millennials connecting my VR headset with my 3D printer?’) and micro-metrics like CPM and CTR, Facebook is building the fastest-growing digital business in the world on the basis of doing good basic segmentation and then offering it to clients who are increasingly unable to do any of this themselves because a) they do not know how to do it or b) they don’t think such things are important any more in the overly tactical world of modern marketing.

God knows I have shoveled some piles of shit onto you from this corner of the Marketing Week website for the past decade, but in this case, Facebook, I doff my marketing cap in your general direction and offer my congratulations. I would have added inter-segment influence using spillover dynamics if you had asked me to improve it further but, hey, that’s a minor issue.

This is a fine bit of segmentation and something that most marketers should admire and learn from. Granted, it’s only going to make your half of the digital duopoly even stronger and more dominant next year, but – and I think we can all agree on this – that was going to happen anyway.

I am depressed and impressed in equal doses by your masterful segmentation approach.

Catch up on all the week’s most important marketing news, from the 50 most valuable UK brands, to Burberry’s hunt for a new creative chief, and the Christmas ads that have launched so far. 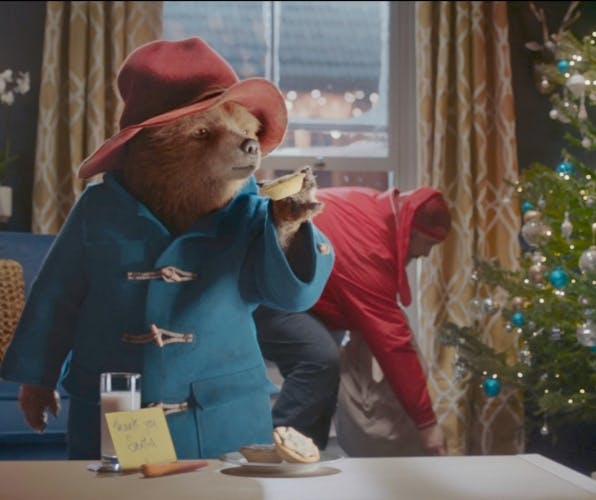