On Tuesday the Evening Standard newspaper published an article (see below) noting that five years ago, when the new daily tabloid i was launched, I had “railed” in Marketing Week about the new brand’s prospects and concluded i would ultimately come to stand for “irrelevant, ill-conceived and ultimately ill-fated”. Five years on and with the i’s circulation at 280,000 the Evening Standard wondered “what other pearls of wisdom Professor Ritson is handing out to his students?”. 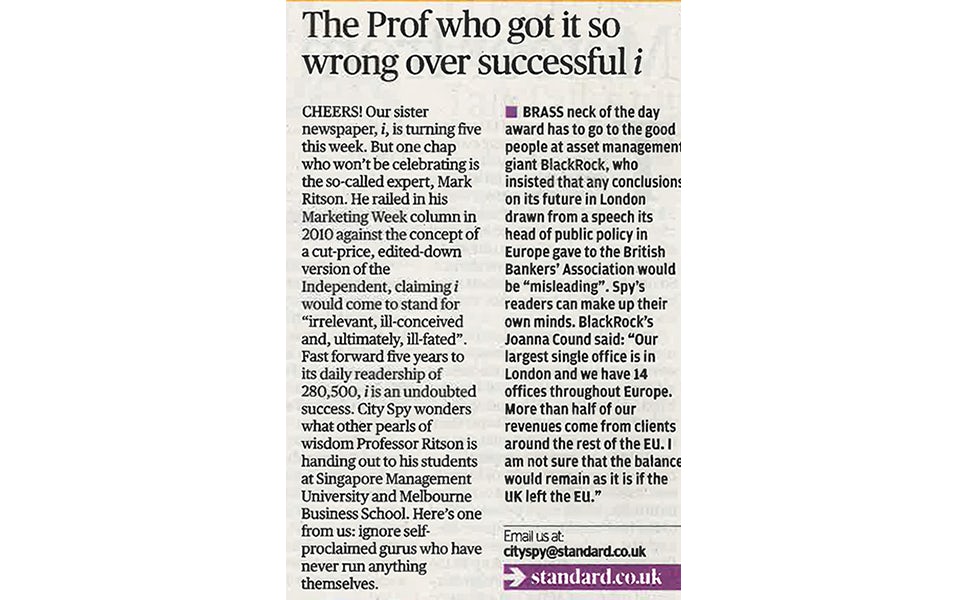 It’s worth noting that the Evening Standard is published by ESI, the company behind the launch of i five years ago, hence the vitriol. To be fair to i, and ESI, any brand that grabs in excess of a quarter of a million customers certainly deserves credit – especially on its birthday. It was clearly incorrect to predict that i would be unable to attract a sizeable customer base.

They did and I got it wrong. But it might also be worth quoting a bit more extensively from my old column back in 2010 and looking at the bigger picture of i and its sister title, The Independent, before concluding, as the Evening Standard did on Tuesday, that I am a “self proclaimed guru who has never run anything themselves”.

I suggest we revisit the part of the column where I discuss what a second paper means for the existing Independent team:

“And look where that will leave The Independent. It has now doubled its output, increased its costs, spread its already small team of journalists even further and cannibalised much of its more profitable Independent sales to boot. That means that not only will i fail, it will leave the Independent in even worse shape too. Like most companies launching a ‘sister brand’ to alleviate poor sales, the Independent is about to learn that the last thing it needed was a new brand.”

While it would be churlish to suggest a circulation of 280,000 is nothing less than a success, can I point out that each and every one of these sales comes at the princely price point of 40p (and indeed for most of the last five years at 20p until recent price increases). That’s a long way short of the £1.40 that The Independent charges each day. And one really must look at i’s success in the context of its sister brand’s decline.

‪Some of that decline may have been due to cannabilisation as readers switched to the much cheaper sister title. More likely, the real story behind The Independent’s decline is the inevitable lost focus, reduced quality and tightened resources that comes from ESI publishing two quality newspapers every day. The Independent lost sales because it was no longer as good as it once was.‬

My original column the Evening Standard attacked on Tuesday was not just about The Independent, it was also about Ford. Both companies had experienced significant losses in recent years and yet both were doing exactly the opposite from one another to restore their fortunes. The Independent had opted to create a second brand; Ford was on a mission to cull its brands and was in the process of divesting Aston Martin, Jaguar, Land Rover and Volvo in order to refocus back on the Ford brand.

Five years on, and ESI is still losing money. Granted, it’s now losing less than back in 2010, but an annual loss of £4.6m is still a loss. Forgive the ignorance of a professor who has “never run anything” but my naive academic approach to business has led me to conclude that before you start trumpeting your amazing success a profit of some kind might be a good idea. Ford’s brand-killing and refocus on the blue oval marque has turned the company from one that lost $17bn in 2006 to one that generated $17bn in profits in 2014. Clearly Ford is a bigger brand in a different category, but the relative turnarounds in their respective fortunes are instructive. Brand killing and focus usually beats brand creation and the division of resources, in the long run.

The i is a triumph of innovation and sales and my column back in 2010 has certainly proved incorrect in suggesting it would fail. But step back and look at the state of the two papers, their long term prospects and the overall value of ESI and I remain convinced that i will still come to stand for “irrelevant, ill-conceived and ultimately ill-fated”.

I’ll eat a very small slice of the humble pie that the editorial team at The Independent suggested I consume on Tuesday on Twitter (below). But I am sending them back the rest of it. Let’s wait until the 10th anniversary, and if you’re still in business, in profit and in good shape on 28 October 2020 I will happily eat the remainder.

But if you don’t make it to 2020, your favourite marketing professor is going to write another column about you. 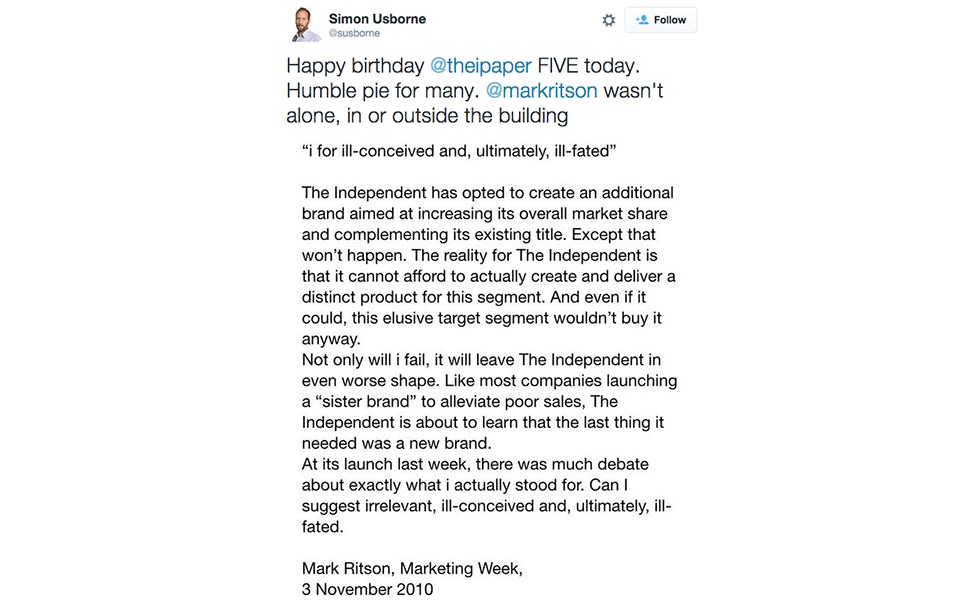 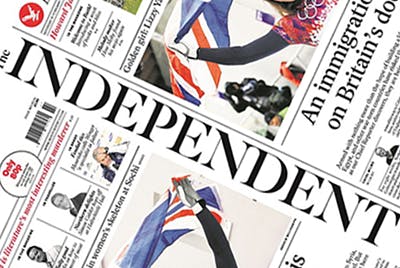 Last week was the perfect occasion to reflect on the strategic advantages of killing brands, and also to highlight the likely trouble for those companies that have the temerity to launch new ones. 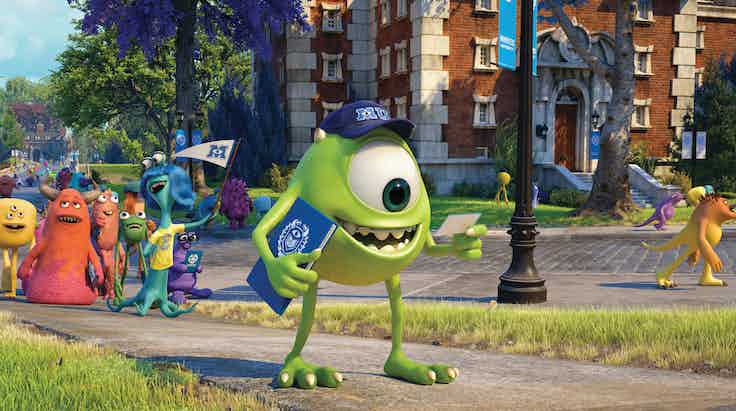 Programmatic and digital advertising is increasingly about the data but many brands are concerned they are losing the emotional touch. At Quantcast’s Supernova event in London today (21 October) Lloyds explained how it wants to make its digital advertising as emotive as its TV campaigns while the agency behind John Lewis’ ads explained why data is not the answer to everything.

Technology is not just changing brands’ relationships with consumers – it is also changing how we as marketers must work.