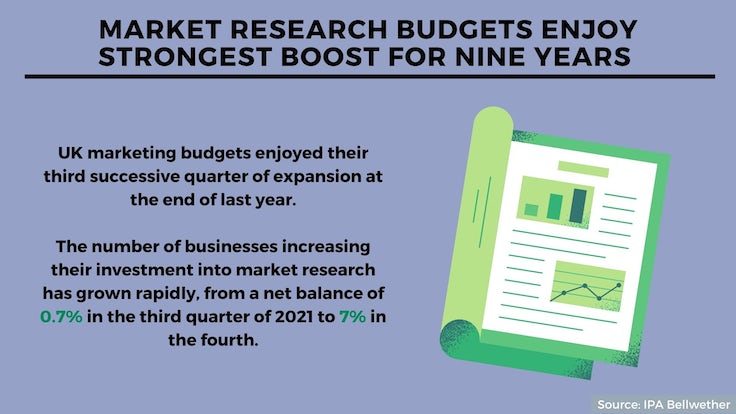 UK marketing budgets enjoyed their third successive quarter of expansion at the end of last year, but economic pressures have slowed their rate of growth.

A net balance of 6.1% of companies revised their marketing budgets upwards in the fourth quarter of 2021, according to the latest IPA Bellwether report. Growth in the third quarter was almost double the rate at 12.8%, before the emergence of the Omicron strain of Covid-19, strong inflationary pressures and heavy supply-chain disruption.

Nevertheless, the report has still branded the increase “robust” in comparison to recent years, signalling the second-strongest improvement since the first quarter of 2019.

While overall budget growth might have slowed, the number of businesses increasing their investment into market research has grown rapidly, from a net balance of 0.7% in the third quarter of 2021 to 7% in the fourth.

In fact, market research was the top performing category in the latest survey period, enjoying its strongest performance since the Bellwether began tracking its budget growth over nine years ago.

Direct marketing registered the next strongest budget growth with a net balance of 3.8%.

Main media advertising followed with a balance of 3.1% of companies revising their budgets upwards, with video experiencing the strongest growth within that category at a balance of 7.3%. However, budget cuts were noted in published brands (-5.9%), audio (-6.3%) and out of home (-8.3%). 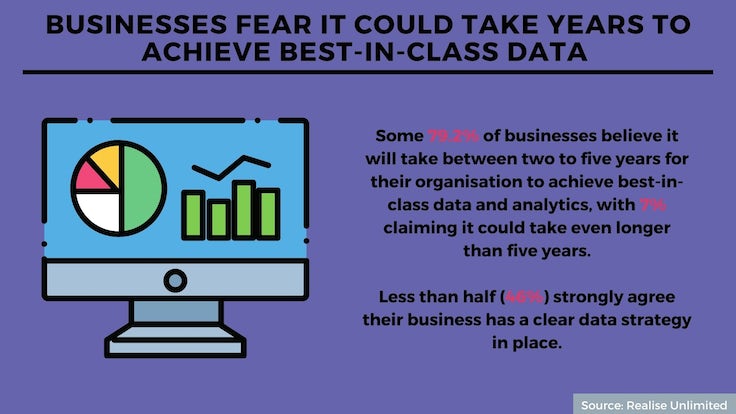 Some 79.2% of businesses believe it will take between two and five years for their organisation to achieve best-in-class data and analytics, with 7% claiming it could take even longer.

According to the survey of more than 80 C-suite executives, conducted by analytical consultancy Realise Unlimited, just 34.6% of respondents strongly agree they know what best-in-class data and analytics looks like, while less than half (46%) strongly agree their business has a clear data strategy in place.

Just 25.9% of those surveyed strongly believe their data and analytics capability is ahead of other companies in their sector, while only 28.4% strongly agree their organisation has a data-driven culture.

More than one in three of the businesses surveyed don’t currently have a board member primarily responsible for all data and analytics capabilities. Of those that do, 59.1% leave data capabilities to their CEO, compared to just 9.1% delegating responsibility to a chief data officer. Just 6.8% put their CMO in charge of managing data and analytics.

The research finds the most significant challenge to maximising the value of data and analytics in business is a lack of training (33.3%), followed by a lack of budget (32.1%), lacking awareness of what data can do (28.4%) and struggling to recruit and retain specialist staff (24.7%).

Other issues raised include a lack of investment in analytics and insight (23.5%), data teams lacking business understanding (23.5%), poor internal communication (21%), data teams not working closely enough with business teams (17.3%) and having siloed data (17.3%).

That being said, 95% of those surveyed believe they work with high-quality data and 88.9% think their data systems are integrated, scalable, functional and stable. Some 86.4% believe their data and analytics function has improved significantly in the last five years and utilises advanced machine learning and artificial intelligence techniques. 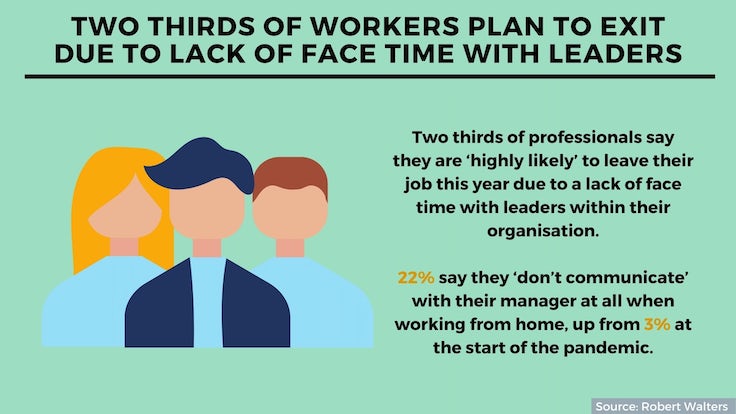 Two thirds of professionals say they are ‘highly likely’ to leave their job this year due to a lack of face time with leaders within their organisation.

Almost half of the 4,000 professionals surveyed by recruiter Robert Walters believe fewer meetings and interaction with their manager has impacted their output, while 22% say they ‘don’t communicate’ with their manager at all when working from home, up from 3% at the start of the pandemic.

The research finds a third of managers have permanently adopted a new management style post-Covid, in favour of holding formal and informal catch-ups with their staff over the phone or via video call, rather than in person.

Many professionals believe this lack of contact with their line manager has resulted in them being overlooked for new opportunities (44%), progression (37%) and training (26%).

Furthermore, the survey found 62% of professionals would be ‘put off’ a new job offer not delivered in person – either face to face or via video call. 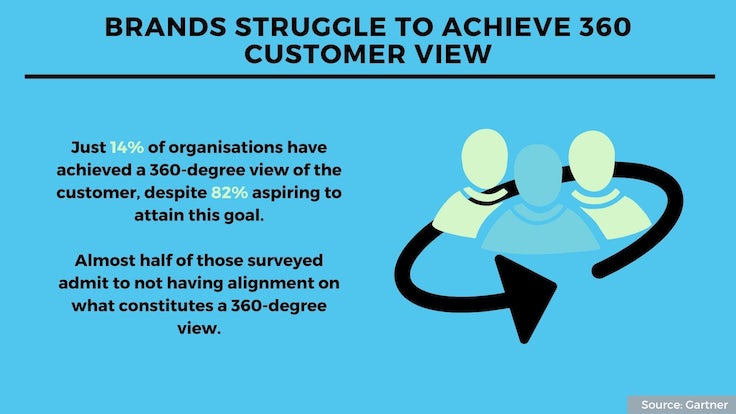 Just 14% of organisations have achieved a 360-degree view of the customer, despite 82% aspiring to attain this goal.

A survey of more than 400 marketing, IT and other leaders responsible for customer data initiatives, conducted by Gartner, found 60% of respondents believe they need every data point possible to achieve a 360-degree customer view.

Of this number, 72% of respondents also believe the more data they collect, the less benefit they see.

Furthermore, almost half of those surveyed admit to not having alignment on what constitutes a 360-degree view, which complicates the purchase of new technology.

For respondents who achieved a 360-degree view of their consumer, customer data platforms were the most frequently cited technology used to house it, replacing CRM platforms. Those brands who claim to still be working toward a 360-view are more likely to identify CRM as their preferred platform.

Acquiring the tech on its own is not enough, however. The research found that three times as many respondents had adopted a customer data platform as had actually achieved a 360-degree customer view. 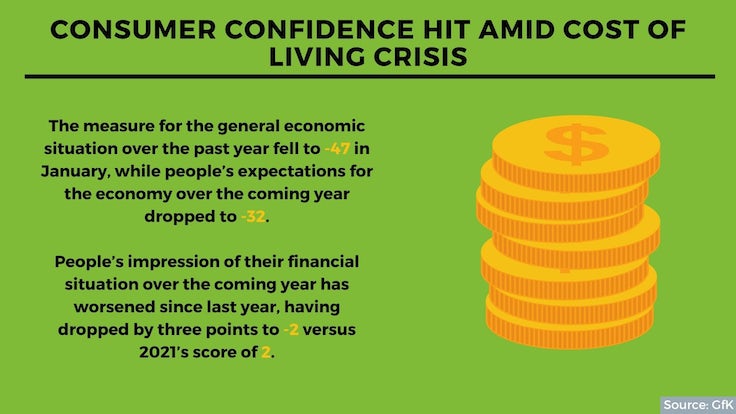 With inflation at a 30-year high and the prospect of surging gas and electricity bills, consumers are not feeling confident about their money despite the easing of Covid restrictions.

GfK’s latest Consumer Confidence Barometer shows a four-point drop to the overall index score for January (-19), with all five measures sliding down and in negative territory.

People’s view of the economy is especially bad this month, with consumers’ view of the past 12 months and the year ahead both dropping by eight points.

The measure for the general economic situation over the past year fell to -47 in January, while people’s expectations for the economy over the coming year dropped to -32.

While these scores are still in negative territory they have both improved compared to January 2021, when people’s view of the economy over the past 12 months stood at -67 and expectations for the following year stood at -44.

The index measuring people’s personal finances over the past year decreased by one point to -6 this month, marginally better than the score of -8 recorded in 2021. People’s impression of their financial situation over the coming year has worsened since last year, having dropped by three points to -2 versus 2021’s score of 2.

Meanwhile, the major purchase index has dropped by four points to -10, although this is 14 points higher than it was in January last year.