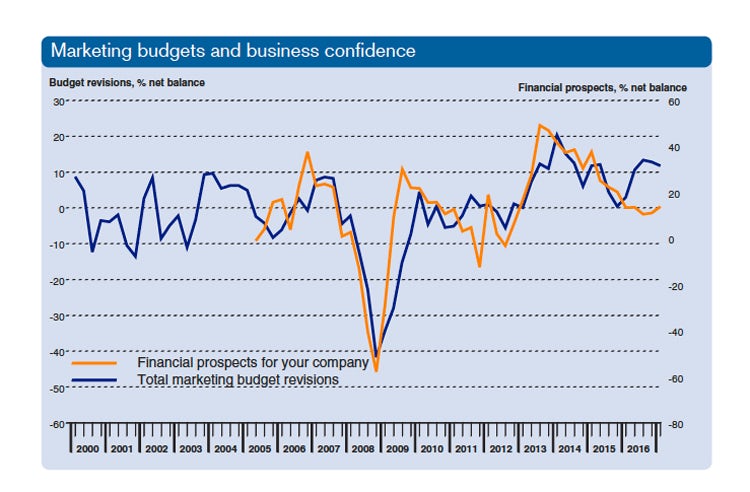 Despite economic concerns around Brexit and security fears around advertising with Google, marketers have started the new year by increasing their budgets once again.

More than a quarter (26.5%) of senior marketers indicated an increase in marketing budgets in the first quarter of 2017, compared to 14.7% who signalled a fall, according to the IPA’s quarterly Bellwether report.

This means the net balance of marketers saying they would increase their marketing spend was 11.8%, marking the fourth consecutive year of growth. However, this is fractionally lower than Q4’s net balance of 12.9%.

Digital remains the most popular medium, with the channel recording the biggest spend increase in just under four years. Exactly a quarter of the survey panel recorded an upward revision to their internet marketing budgets, compared to just over 8% that said they would be reducing spend. The resulting net balance was +16.9%, a 4.8% increase compared to the fourth quarter of 2016.

This is perhaps surprising given the sheer quantity of major brands that pulled advertising out of Google in March following a damaging investigation by The Times. However, the rise in digital spend follows Internet Advertising Bureau [IAB] UK and PwC’s recent annual digital ad spend report. It showed digital advertising spend grew 17.3% in 2016 – its fastest rate of growth for nine years – and suggested the Google controversy wouldn’t prevent digital’s “unstoppable rise.”

In particular, spend on search increased significantly, according to the latest Bellwether report. The net balance of marketers investing in SEO increased to +15.7% from +7.1% in the previous quarter, making this the best reading since the end of 2014.

Main media advertising, which includes marketing spend related to TV, press, radio and cinema, also saw a rise in investment. The respective net balance jumped to +10.7% during the first quarter of this year, up from +5.1% in the previous quarter.

However, market research (-9.9%) recorded a strong fall in budgets compared to the end of 2016.

According to Paul Smith, senior economist at IHS Markit and author of the report, marketers’ increased confidence around the economy has led them to invest in traditional “big ticket areas” to protect their market share.

“[The economy] hasn’t fallen away as dramatically as was predicted by economists. This meant people didn’t have the confidence to invest in more expensive areas such as TV. But whether this confidence will continue is hard to predict,” he says.

Confidence in marketing budgets and the economy 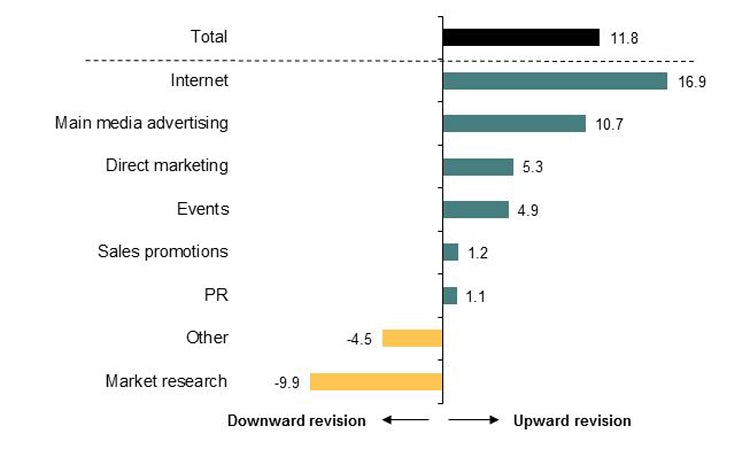 Marketing executives seem positive when it comes to their budgets in 2017. The report suggests that exactly 41% of the survey panel expect to record an increase in their overall marketing budgets, compared to around 15% that forecast a fall.

Wider company financial prospects also improved during the first quarter of 2017. Over 32% of marketers expect their financial prospects to increase, compared to under 19% that indicated a fall. The respective net balance of +13.9% was up from +11.2% in the previous survey period and the best recorded in over a year.

General economic activity is up, consumer spending continues to rise and business investment is being sustained. Companies are subsequently seeking to take advantage of current business opportunities.

That said, the degree of confidence remains down on levels seen between 2013 and 2015. Following the Brexit vote, there is also some concern over the impact of increased inflation, with the devaluation of sterling leading to higher costs and worries of how to pass these on to customers. A potential squeeze on household incomes could lead to slower sales growth.

The fourth quarter of 2016 showed that while marketers were upbeat about their own personal prospects, they were feeling insecure about wider industry prospects. The first quarter of 2017 was no different. That said, marketers’ confidence in the wider industry did rise to its highest level since the end of 2014. The report shows the net balance for the first quarter is -5.7%, up from -14.6% in Q4 2016.

He tells Marketing Week: “General economic activity is up, consumer spending continues to rise and business investment is being sustained. Companies are subsequently seeking to take advantage of current business opportunities, while also looking to capitalise on current growth.”

With the UK economy showing considerably more resilience during the second half of 2016 than what was originally predicted, this positive momentum is forecast to carry into 2017.

But Smith remains cautious. With the UK committed to leave the EU by spring 2019, economic growth is expected to be relatively muted for the foreseeable future. Nevertheless, ad spend for 2017 has been revised up to 0.6%, after previously being expected to dip by -0.7% in 2017.

He explains: “With all of this in mind, we’re subsequently forecasting that overall advertising spend will increase in real terms during 2017, but only relatively modestly (0.6% on the year). And in line with a softer economic performance, ad spend looks set to stagnate in 2018 before recovering towards the end of the decade.”

Nick Robinson, marketing director at AB InBev UK and Ireland believes the brands that will stand the test of time are those that stay consumer-centric.

He concludes: “While uncertainty is the order of the day at the moment, both in the UK and further afield, as large political events dominate the agenda, it is still paramount  for the marketer to keep their focus on the consumer. The companies that continue to invest in their brands and retain that consumer connection will reap the rewards in the long term.”

Enter Marketing Week’s Masters of Marketing awards, taking place in October. For more information on the awards including a full category list and how to enter, visit www.festivalofmarketing.com/awards

The latest quarterly IPA Bellwether report reveals marketers are less confident about hiring staff due to the ongoing uncertainty over Brexit.