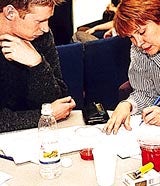 Sales targets are being revised downward, confidence in achieving targets is at an all time low and marketing expenditure is suffering, according to the Spring 2001 Marketing Trends Survey (MTS) from The Chartered Institute of Marketing (CIM).

Results suggest that the decline in the US stock market and problems associated with foot-and-mouth disease have had a major impact on UK marketers’ outlook.

A downward revision of planned sales growth from 7.1 per cent three months ago, to 4.9 per cent, means that planned sales growth is lower than it has been for over five years. This downward revision of targets has prompted a slight increase in confidence among marketers to meet them, since the CIM Confidence Index has risen from 89.3 per cent in the Winter MTS to 89.7 per cent.

But even with this small rise in confidence, the index remains at a historically low level. Low confidence, especially so early in the year, points to an unusual level of caution.

CIM says that many marketers do not appear to be responding to the message that a competitive advantage can be gained through a recession. An increase in spending of just 2.9 per cent is planned for the total sales resource, representing the second-lowest increase since the survey’s inception in 1994.

A breakdown of this increase in spending illustrates the clear winners and losers in the market. Advertising, public relations, sponsorship, direct mail and telemarketing are set to experience spending increases that are lower than the growth in spending on the sales overall. Promotional activity, lead generation, Internet/Intranet activity and investment in information systems will all experience substantial increases in investment.

The two areas being targeted for the largest increases in spending remain Internet/Intranet and IT systems, confirming that e-commerce and e-CRM continue to be important. But those areas that marketers have been concentrating on are now seeing slowdowns.

The increase in spending on IT systems is the slowest since the survey started. The seemingly respectable increase of 6.2 per cent on Internet and Intranet activity is brought into perspective by the fact that it increased by 8.2 per cent in the spring 2000 survey, and 10.6 per cent in the autumn MTS.

Particularly noticeable is that the very large companies – those with an annual turnover of &£100m or more – are not expecting to increase their total sales resource. The results suggest that large companies are intending to balance their marketing budgets. Despite a static position in their sales hierarchy, heavy investment is planned to continue in Internet capabilities with an increase of 8.8 per cent.

Organisations in the &£50m to &£100m annual turnover appear even more committed to developing their e-CRM capabilities. An increase of 11.7 per cent on Internet spending and nine per cent on IT systems points to major development taking place during the coming year.

Despite this general slowing of investment in marketing activity, overall staffing levels in marketing departments do not appear to be in decline. Eighty-one per cent of respondents report no planned changes in their staff levels. The four per cent that are substantially reducing their staffing levels appear to be counterbalanced by the 16 per cent of respondents that are planning to increase the number of marketers within their organisations.

This stability masks some strong industry-specific trends. Food, beverages and tobacco, machinery and light manufacturing all report the imminent reduction of their marketing staff. Although no respondent said that it would be substantially increasing its marketing staff, many companies in the retail and utilities sectors said that they would be taking on more staff.

Export markets were not considered a priority. Only six per cent considered Europe or the rest of the world to be a priority. Among other aims mentioned as focal points for activity were compensating for loss of business due to foot and mouth, reducing activity and e-commerce.

Overall the Spring 2001 MTS reflects a marketing profession that is exercising caution in the face of potential economic problems. The employment situation appears to be holding steady, but marketing spend on many activities is slowing, and confidence appears to be low.

It was with interest and some incredulity that I read Justine Storey’s article on the debate surrounding the merger of the Sale Promotion Consultants Association and the Institute of Practitioners in Advertising (MW Aril 19). The future of the SPCA is of course of interest to us, Triangle being one of the first and founding […]