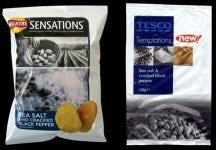 Marketers believe copycat branding by retailers and rival brand owners is becoming a serious threat again, according to research.

A survey of 100 top marketers found that 60% agreed that “plagiarism by competitors was much worse than it was five years ago”.

The research was commissioned by design agency JKR and conducted by market research agency Saville Rossiter-Base in October.

He points to Tesco Temptations crisps, which he argues are similar to Walkers Sensations, but adds that manufacturers are also guilty of copying retailers’ brands.

Knowles believes the issue is symptomatic of a wider problem – the “commoditisation” of brands. The research supports this, with 56% saying this is the biggest threat to their business.

Knowles adds: “Commodities are bought on price. But only one product can ever be the cheapest, and eventually consumers wake up to the fact that manufacturers are cutting corners at the expense of quality, and go elsewhere.”

The resurgence in the 2006 DM Agency Reputation Survey of those agencies that are named after founders or established partners reflects a growing client preference for accountability and tried-and-tested value, but the emphasis is very much on ‘teamwork’. David Reed reports.

MSN is launching a viral marketing campaign for its search facility featuring an avatar called Ms Dewey, a sassy American woman, as it seeks to break Google’s hold on the search market. In the viral, Ms Dewey, played by US actress Janina Gavankar, appears on screen and users ask her to search for them. When […]

EasyMobile sales and marketing director Mike Lewis is leaving the company after the company terminated its brand licensing agreement with its network provider, TDC. He does not have a job to go to. The two parties struck  a deal in early 2005 to launch easyMobile as a mobile virtual network operator (MVNO) in the UK […]