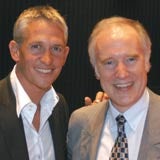 The great and greater of the marketing world were at London’s Soho Hotel last week to attend the launch of PepsiCo UK &amp; Ireland president Martin Glenn’s digital video book, Shoulders of Giants.

The book is the first in a series of digital launches on business topics and charts the rise of Walkers crisps from a small regional brand to one of the UK’s largest packaged goods brands. Attendees included Hugh Burkitt, Tim Ambler, Paul Gostick and Andrew Seth, though the Diary is sure they wouldn’t mind admitting that they were overshadowed somewhat by special guest Gary Lineker. Indeed, reports have reached the Diary that certain marketers who should know better were “like excited schoolboys” while queuing for Gary’s autograph.

No doubt the autograph wasn’t for them, but for their daughter, no, er… son, I mean the wife, yes, that’s right, the wife.