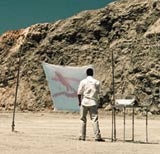 Household cleaning company Orange Glo has been rocked by the departure of European marketing chief Mark Jaffe, less than a year after launching in the UK.

Jaffe’s departure will be a blow to Orange Glo, which is struggling to establish its range of cleaning sprays, polishes and stain removers in the highly competitive household cleaning market.

Jaffe’s responsibilities as European marketing director will be passed to managing director Linda Appel Lipsius, and the company is not looking for a replacement.

Jaffe handed Orange Glo’s &£4m advertising business to Partners BDDH earlier this year (MW May 1). The first work for the brand broke in July, with a &£1m launch campaign for its OxiClean cleaner. Last week, the company axed its US agency Campbell Mithun just eight months after its appointment.

The launch of the Orange Glo cleaning range has been hit by a number of setbacks. The range still lacks distribution through a number of retailers, and has faced intense competition from own-brand alternatives as well as household goods giant Procter &amp; Gamble, which recently extended its leading Flash range with an orange-based line, backed by a &£5m campaign (MW July 10).