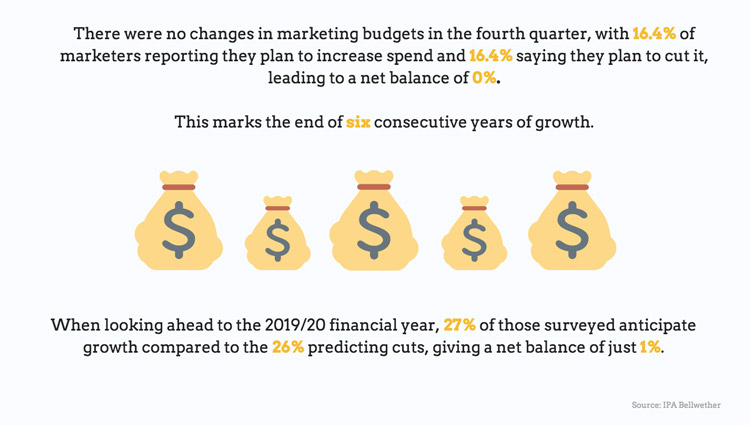 There were no changes in marketing budgets in the fourth quarter, with 16.4% of marketers reporting they plan to increase spend and 16.4% saying they plan to cut it, leading to a net balance of 0% and marking the end of six consecutive years of growth.

When looking ahead to the 2019/20 financial year, 27% of those surveyed anticipate growth compared to the 26% predicting cuts, giving a net balance of just 1%.

Additionally, the underlying pessimism is predicted to impact every media channel.

For instance, main media advertising was expected to fall in the fourth quarter, with a net balance of 6.5% expecting to cut budgets, compared to the 4.8% that anticipated increasing them in the previous quarter.

Internet, search and mobile budgets have also been affected. While they remain in growth, a net balance of just 2.1% of marketers saw rises in the fourth quarter, down from 13.6% in Q3 and 22.7% in Q2. 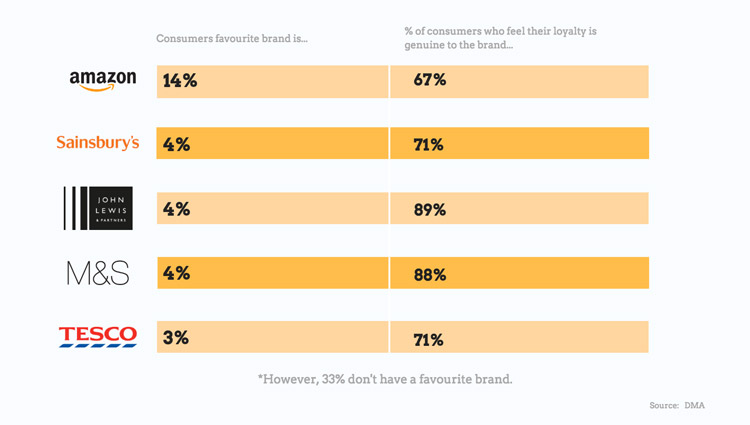 However, some 33% of respondents say they don’t have a favourite brand.

Among the most mentioned brands, the majority of customers are loyal to them because they genuinely like them. For example, 89% say they feel their loyalty to John Lewis is genuine, followed by Marks and Spencer (88%), Sainsbury’s (71%), Tesco (71%) and Amazon (67%). Amazon ranks highest for customers who ‘feel their loyalty is habitual’ to the brand (33%).

3. Smart speakers to be the fastest-growing connected device 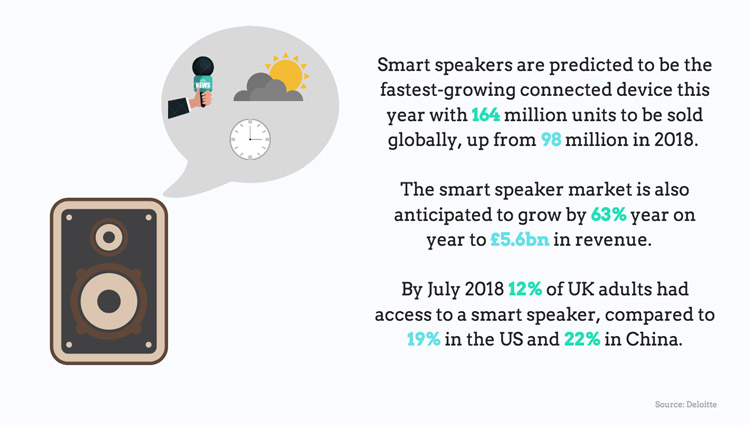 Smart speakers are predicted to be the fastest-growing connected device this year with 164 million units to be sold globally, up from 98 million in 2018.

The smart speaker market is also anticipated to grow by 63% year on year to £5.6bn in revenue.

Meanwhile, radio is predicted to maintain its hold on UK media consumption with 47 million people listening to radio at least once a week. While global radio revenues are forecast to increase to £31.6bn, up 1% on 2019. 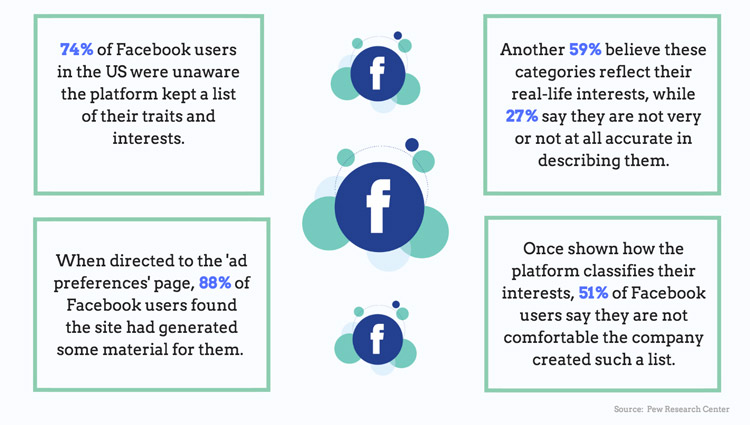 Some 74% of Facebook users in the US were unaware the platform kept a list of their traits and interests (in the ad preferences section) until they took part in a recent study.

The report found when directed to the ‘ad preferences’ page, 88% of Facebook users found the site had generated some material for them. Another 59% believe these categories reflect their real-life interests, while 27% say they are not very or not at all accurate in describing them.

Once shown how the platform classifies their interests, roughly half of Facebook users (51%) say they are not comfortable that the company created such a list.

Of this 51%, nearly three quarters (73%) say the platform’s categorisation of their politics is very or ‘somewhat’ accurate, while 27% say it describes them ‘not very’ or ‘not at all’ accuratel 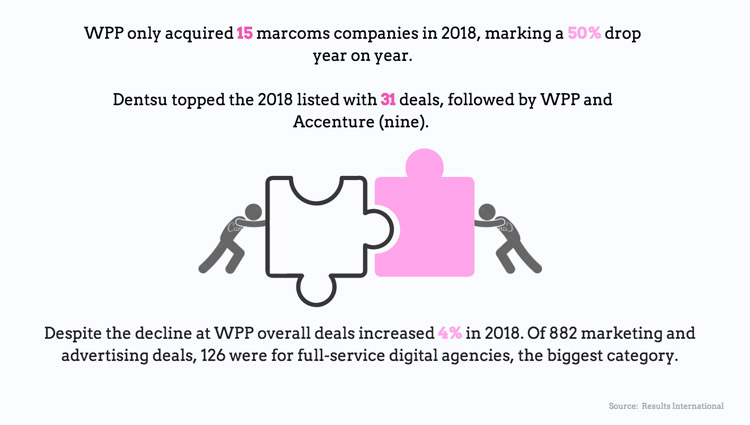 WPP’s merger and acquisition activity fell last year, with the company only acquiring 15 marcoms companies in 2018, marking a 50% drop year on year. The decline is likely a consequence of restructuring plans driven by new CEO Mark Read.

Dentsu topped the 2018 list with 31 deals, followed by WPP and Accenture (on nine).

Despite the decline at WPP, overall deals in the sector increased 4% in 2018. Of 882 marketing and advertising deals, 126 were for full-service digital agencies, the biggest category.

Additionally,  22% of all marcoms deals completed globally this year were private equity-backed, a 79% increase on 2017. 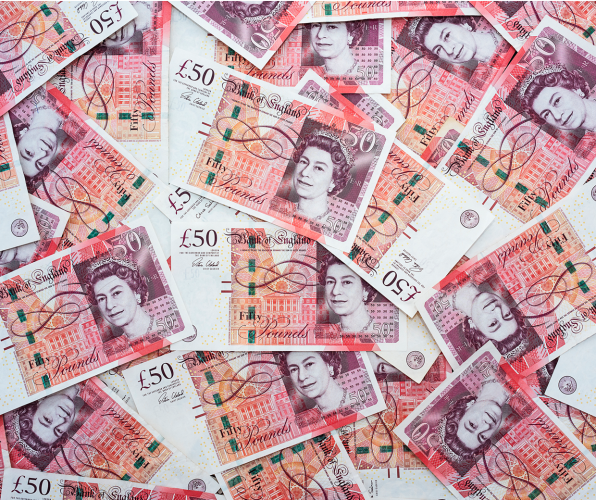 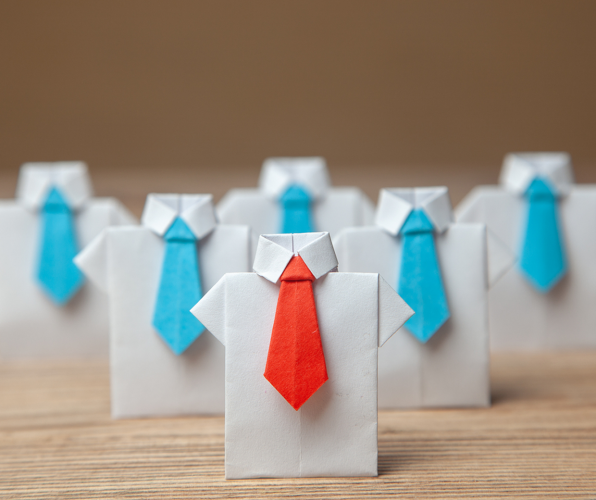 Hiring intentions among marketers remain robust despite falling optimism around marketing budgets and both their company’s and industry’s financial outlook as technological development, product launches and opportunities for business growth overseas fuel hiring. 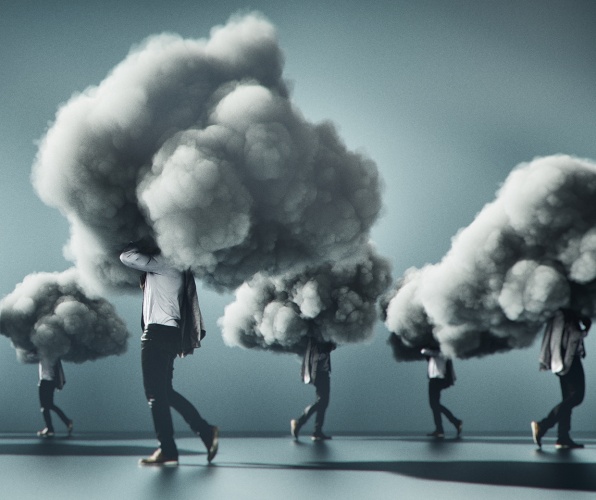