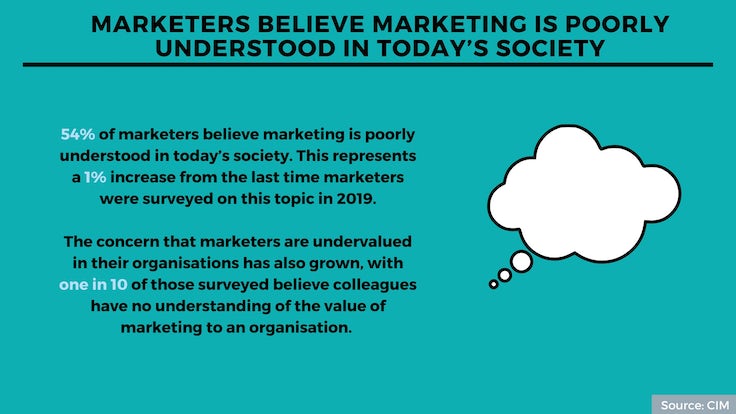 A majority of marketers (54%) believe marketing is poorly understood in today’s society. This represents a very slight increase (1%) from the last time marketers were surveyed on this topic in 2019.

Around four in 10 say they struggle to explain the role of marketers to others, perhaps surprising in an industry that focuses on communication and persuasion. This also represents an increase from 38% in 2019, suggesting there may have been an increase in the siloing of marketing teams.

The concern that marketers are undervalued in their organisations has also grown, one in 10 of those surveyed believe colleagues have no understanding of the value of marketing to an organisation. This represents a 5% increase from the previous survey.

The data comes from the Chartered Institute of Marketing (CIM) which surveyed 500 UK in-house and agency marketing professionals.

Post-pandemic, most marketers (59%) are also finding it more difficult to predict consumers’ priorities. While the vast majority (91%) say they will need to evolve their brand and business model to keep pace with these new priorities.

Almost a fifth (18%) of marketers say traditional marketing and advertising is unfit for purpose. When asked why they feel this way, 55% say the rise of social media influencers who market themselves is the key cause, while an equal number cite the rise of customer experience technology. 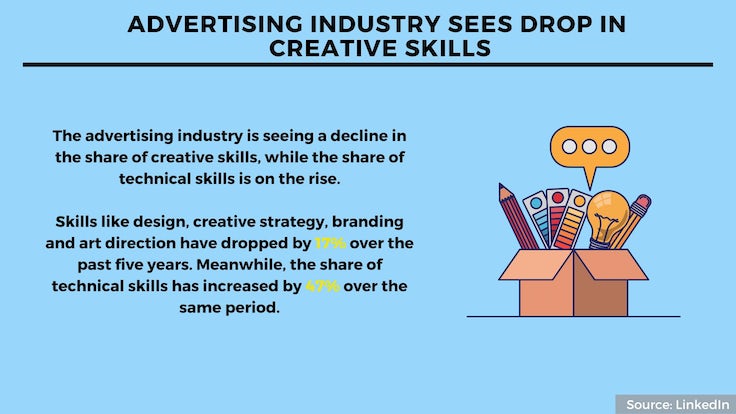 The data from LinkedIn suggests creative skills like design, creative strategy, branding and art direction has dropped by 17% over the past five years. Meanwhile, the share of technical skills has increased by 47% over the same period.

The data suggests this trend is exacerbated when looking specifically at companies that regularly attend the Cannes Festival of Creativity. At these companies, the share of tech skills has increased 67% over the past five years, while the share of creative skills has decreased by 32% 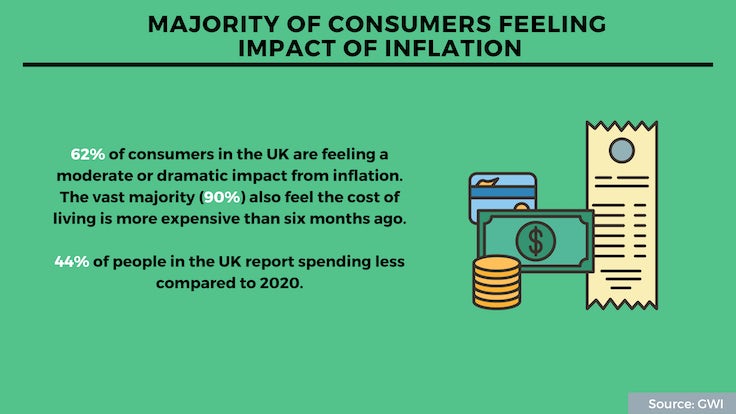 More than six in 10 (62%) of consumers in the UK are feeling a moderate or dramatic impact from inflation. The vast majority (90%) also feel the cost of living is more expensive than six months ago.

A significant proportion of UK consumers are making spending cuts, according to data from GWI. More than four in 10 (44%) people in the UK report spending less compared to 2020.

Consumers report making lifestyle changes to adjust to the cost of living crisis. More than half (52%) say they are cutting down on the energy used in the home, while around four in 10 say they are walking or cycling more (44%) or preparing meals at home (41%).

“Even though many may feel that they are not yet at a crunch point regarding finances, the consumer dilemma is starting to make itself known and there are choices being made throughout the purchase cycle, even for those who are feeling relatively comfortable,” says GWI’s chief research officer Jason Mander.

Coca-Cola ‘most chosen’ brand of the decade 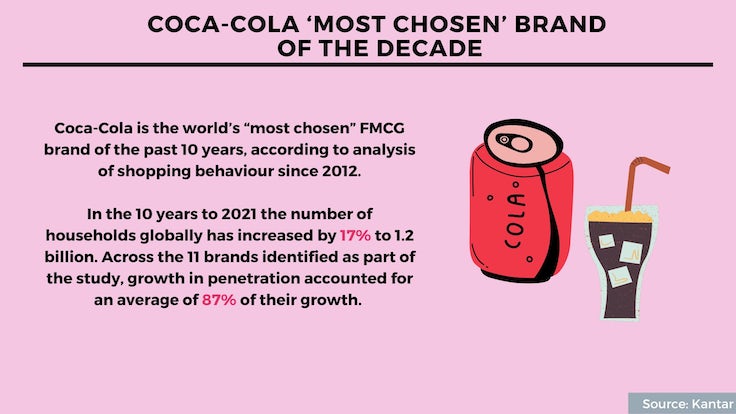 Coca-Cola is the world’s “most chosen” FMCG brand of the past 10 years, according to analysis of shopping behaviour since 2012. As part of the study Kantar has identified 11 FMCG brands, each of which saw the biggest growth within their respective category.

Of the 11 brands identified, Coca-Cola actually had the lowest growth rate, although it started from the highest level. Cleaning brand Vim was identified as the world’s fastest growing FMCG brand over the past decade (265%), followed by Dettol (142%) and Sunsilk (64%).

In the 10 years to 2021 the number of households globally has increased by 17% to 1.2 billion. Across the 11 brands identified as part of the study, growth in penetration accounted for an average of 87% of their growth. This means it’s crucial for brands to ensure children establishing their own homes make the same shopping choices as their parents as this is key to long-term success, Kantar suggests.

For example, the number of households buying Coca-Cola has increased by 17% over the decade, which is in line with household growth.

The average number of FMCG brands households choose per year has remained consistent at 55 over the past 10 years, while the average spend on branded groceries has increased from $730 per year in 2012 to $862 in 2021. 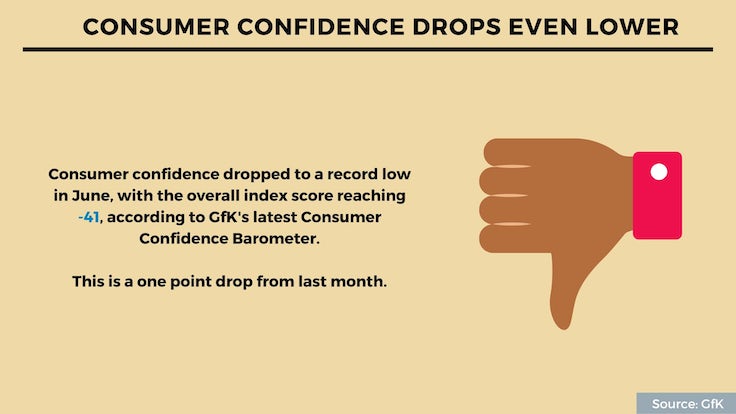 Consumer confidence dropped to a record low in June, with the overall index score reaching -41, according to GfK’s latest Consumer Confidence Barometer, a one point drop from last month.

The index measures consumers’ views of their personal financial situation, as well as the wider economic outlook, with all four measures remaining in negative territory. Consumers’ view of their own financial situation over the next 12 months has dropped three points to -28, while their view of their personal finances over the past 12 months has fallen by one point to -23.

People’s opinion of the general economy has also taken a further hit. Looking back over the past 12 months, the score drops two points to -65, with people’s expectations for the economy over the coming year slipping one point to -57.

“Can it get any worse? The answer is probably yes,” Joe Staton, client strategy director at GfK tells Marketing Week. “With prices rising faster than wages, and the prospect of strikes and spiralling inflation causing a summer of discontent, many will be surprised that the index has not dropped further.”

He added that the consumer mood is currently “darker” than in the early stages of the pandemic and the 2008 global financial crisis.