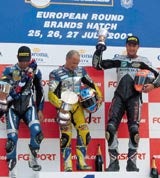 Interpublic Group’s Silverstone motorsports business has been hit by the departure of marketing chief Alistair Farrimond.

Farrimond has only been Silverstone marketing director for three months , having moved from the same job at Brands Hatch when the business was sold in January. Farrimond will leave in April to go travelling. A replacement has not been found.

IPG sold Brands Hatch – breaking up its Octagon Motorsports division – to racing driver Jonathan Palmer in a deal worth about &40m last month. IPG retained the rights to the British Formula One and the Silverstone circuit.

Farrimond was previously head of travel marketing for Disney’s Parks and Resorts division, and has also held marketing positions at Proton Cars and Universal Studios Escape.

Farrimond’s departure comes at the same time as news of a cull of his former marketing staff at Brands Hatch. All marketing positions are to be made redundant as part of a wider restructuring that will affect up to 50 people, including senior marketing executives Melissa Saunders and Colin Robert.

The loss-making Brands Hatch business – which was later renamed Octagon Motorsport – was blamed for Octagon’s financial troubles since its acquisition in 1999, and hastened the departure of IPG’s sports chief Mark Dowley last year (MW September 4, 2003).

Trade exhibitions have often been labelled a waste of money, but if they embrace modern technology and learn from their mistakes, they will remain a valuable marketing tool, says Helen Donald