Based on YouGov BrandIndex’s Buzz metric (which is a measure of the positive and negative things said about a brand), M&S’s retail brand came seventh with a score of 11.3. It was also in the top 10 improvers with its score rising by 6.4 points over the past year.

YouGov says a strong Christmas marketing campaign helped push the brand to the forefront of people’s minds, as did an improvement in perceptions of its female fashion following the success of pieces such as its suede skirt.

Speaking earlier this year, M&S CEO Mark Bolland said campaigns such as its “Fairy” festive push and the “Only M&S” initiative, which created one unified brand idea, has been extremely well received, boosting brand appreciation.

“It’s about changing people’s minds but they are taking a more appreciative stance. There’s no direct line there yet but brand building is going in the right direction…. It’s a journey,” he added.

In food, YouGov says M&S has “made a virtue of quality, even when offering meal deals”. The strategy is a marked difference to the “big four”, which have been pulled into a price fight with the discounters Aldi and Lidl. 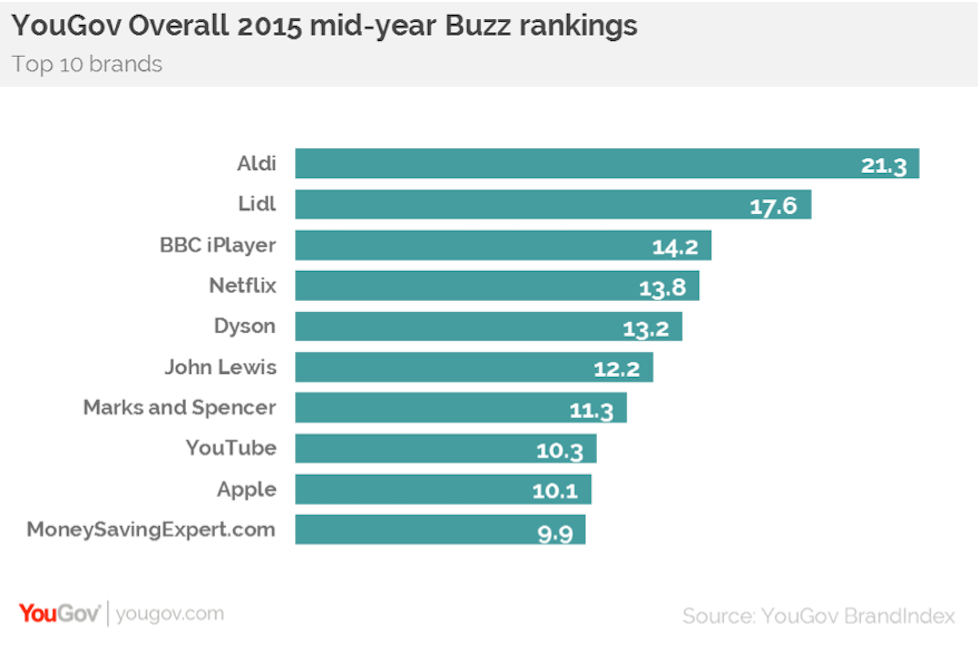 Aldi and Lidl were rated the top brands by consumers for the third time while much of the top 10 remained unchanged with BBC iPlayer, Netflix and John Lewis also featuring.

Murphy says: “Aldi and Lidl’s durability and success has been down to steady expansion of their store networks and also growing their customer base to include a wider demographic range. Efforts from industry rivals have not checked their popularity and the core message of both is now that they offer both affordability and quality.”

Netflix in particular had a good year coming in in fourth, up from eighth a year ago. Tech companies are increasingly creeping into the top 10, with YouTube and Apple both appearing this year, pushing out more traditional brands such as Waitrose and BBC.co.uk.

The Co-operative seems to finally be turning a corner and leaving the travails of the past few years behind it. Its banking, retail and insurance businesses all showed the biggest improvements of any brands. 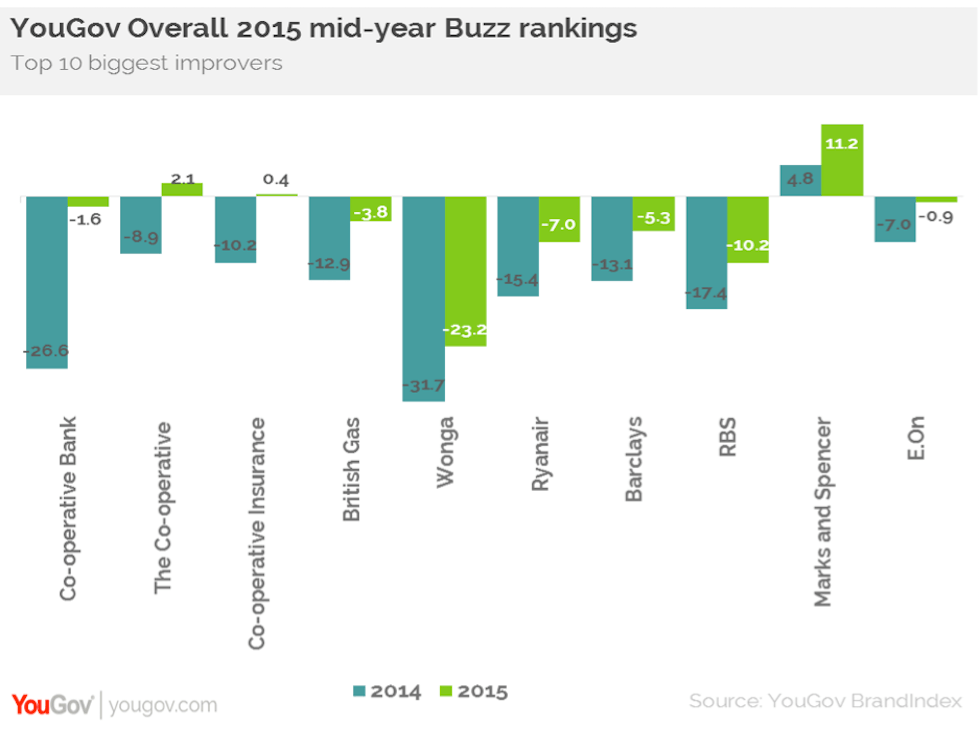 Brands such as Ryanair and Wonga, which have both invested in marketing campaigns and customer experience aimed at improving consumer perceptions, have also seen their scores rise.

Over the next year, Murphy expects the economic recovery to boost brands such as the big four supermarkets and energy companies.

“As consumers start to feel the economic recovery in their wallets, will it be that things move back towards the centre ground and people might start being prepared to pay a little more for slightly better quality goods?

“In the next year, we can anticipate brands like Netflix to become a mainstay in YouGov’s rankings. A successful past year on both sides of the Atlantic has redefined the way we consider the television industry, with huge potential for growth still there,” she says.

Marks & Spencer’s has said it will improve personalisation on its website to offer  customers individual product recommendations, advice and inspiration as it looks to building on improving sales and boost its online performance.