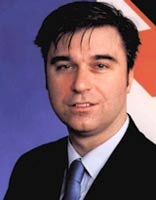 Danone-owned Jacob’s Bakery has appointed Graham Hunter – the man behind the launch of Mars Celebrations – as its marketing director for the UK and Ireland.

Hunter spent ten years at Mars, working on Mars Bar, Galaxy and Celebrations, where he was most recently European central marketing brand leader. He reports to UK, Ireland and New Zealand managing director, Lorna Davies. It is not clear whether Mars has replaced Hunter.

Davies says: “Hunter’s arrival coincides with our plans to rejuvenate the entire company.”

Hunter adds: “Joining Jacob’s at this time will be extremely challenging and invigorating.” Hunter joins Jacob’s as it prepares to move its marketing operations from Liverpool to London to streamline communications. The company declined to comment about the future of existing marketing staff, or whether the department will expand.

Jacob’s has been hit by the departure of several marketers in recent months. Paul Cousins quit to become a director of marketing consultancy Catalyst and was replaced as marketing director by Barbara Reid earlier this year (MW January 27).