Dillon, who is currently global chief marketing officer and executive vice president at McDonald’s, will become president and chief executive officer, on 1 June.

She replaces retiring president and CEO John Rooney, and will join the board of the country’s sixth-largest wireless carrier.

The move comes weeks after Dillon told an audience of 15,000 franchisees, marketers and suppliers that the new I’m Lovin’ it campaign for the fast food chain would be “an updated take on its iconic, 7-year-old “I’m Lovin’ It” campaign” that came about after more than a year of consumer research and agency brainstorming.

The restaurant is bringing the strapline out from behind the arches and into the action “to better brand and celebrate those uniquely McDonald’s moments,” Dillon says.

It is unclear who will replace Dillon at the fast food chain, with bosses currently short listing candidates for the top job.

Dillon joined McDonald’s in the 2005, and prioritised the use of consumer-based insights and research to drive marketing strategy. Her areas of focus included ongoing innovation in marketing planning and execution, brand evolution and creative strategy, children’s well-being initiatives, global sports alliances and marketing talent development.

Prior to joining McDonald’s, Dillon was president of the Quaker Foods division of PepsiCo Corporation. She began her career in marketing for Quaker Oats in 1984 and held positions of increasing responsibility across several food and beverage categories, including serving as the VP-Marketing for Gatorade.

Chime Communications, owner of VCCP, says it expects to perform ahead of market expectations for the first half of the year with operating profit up from last year, thanks to a series of new business wins. 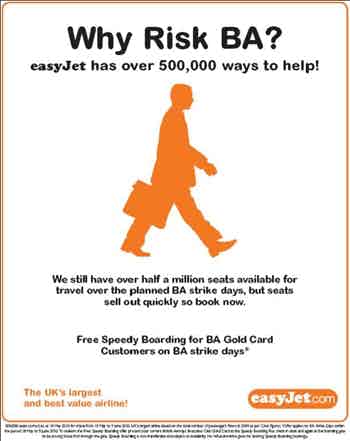 EasyJet is taking advantage of possible British Airways strike action to promote its services and take a swipe at its rival.