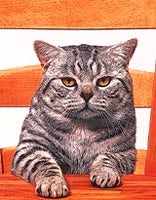 Masterfoods UK is stepping up its presence in the growing pet insurance market, with the launch of a scheme through its leading pet food brands.

The scheme, which is underwritten by GE Capital, is to be marketed on a brand-by-brand basis, initially through Whiskas, Pedigree, Sheba Cat Food and Cesar Dog Food brands. Although the company has had an insurance scheme for a number of years, it has never actively marketed it using its brands.

A direct mail campaign created by WFCA Integrated will promote the scheme. The work marks the agency’s appearance on the Masterfoods roster. In the past, the food company has used a number of agencies, including Proximity London for its pet food direct marketing.

According to the RSPCA, 12 per cent of dog owners and seven per cent of cat owners have pet insurance. As well as the charity, Tesco, Royal &amp; SunAlliance and Direct Line Insurance also offer schemes. PetPlan, which is owned by Cornhill Insurance, leads the market with a 40 per cent share.

Last week’s summit to help the nationals unite to sell the medium was hardly the best occasion for Piers Morgan to put the boot into his rivals, says Torin Douglas

To paraphrase Maureen Lipman’s Beattie: what does it matter as long as it’s an ‘ology’? That, in a nutshell, is the attitude of most big food brands towards the endorsement of their products by objective scientific opinion. They need no lessons in the efficacy of such a stamp of approval in leveraging sales; their only […]

The Department of Transport, Local Government and the Regions (DTLR) has appointed a roster of six agencies – D’Arcy, Abbott Mead Vickers.BBDO, WCRS, Rainey Kelly Campbell Roalfe/Y&R, BMP DDB and Euro RSCG Wnek Gosper – to work on its &£20m business. The move, first mooted in November, is the first time the department has had […]