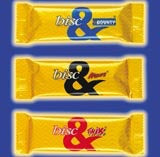 Masterfoods, the company that spread its confectionery brands into ice cream with profitable results, is hoping to compete in the biscuit market against giants such as Nestlé, McVitie’s and Fox’s with the launch of new brand bisc& (MW last week).

When Masterfoods moved into ice cream with the launch of the Mars ice cream bar, it virtually created a new product category. In the chocolate biscuit bar sector, however, there are already a number of long-established players. Information Resources puts Nestlé’s Kit Kat as the top seller with value sales of &£77m in the year to October 2002, followed by McVitie’s Penguin at &£39m.

According to the latest Mintel research in 2001, the total value of the sweet biscuit market was estimated at &£1.4bn, down by 0.3 per cent from the previous year.

Children’s biscuits and healthier biscuits experienced value uplifts of 11 and 7.2 per cent respectively from the previous year, but everyday declined by 5.8 per cent and seasonal biscuits fared almost as badly, losing 5.4 per cent of its value sales over this period. The largest sub-sector, chocolate biscuit bars, which is valued at &£447m, declined by 2.2 per cent.

The decline is due in part to the fact that the ultra-competitive sector is heavily driven by promotions which reduce the value of the market. This was underlined two weeks ago when Jo Stewart, the chief executive of Northern Foods, which owns Fox’s Biscuits, blamed bad results on “tastier and deeper promotions than we would normally see” by rivals such as McVitie’s.

The global confectionery market, where bisc& has its roots, is also flagging. Masterfoods is seeking new revenue streams and has turned its eye to biscuits. The bisc& family – bisc& Mars, bisc& Bounty, bisc& Twix and bisc& M&M’s – is Masterfoods’ biggest launch in the UK since Celebrations in 1996. It will be backed by a hefty &£15m of marketing spending, including an &£8m television campaign.

The bisc& brand, which was unveiled by Mars last year, exists in more than 20 major markets, including the US where it is called cookies&. This global launch is the first real attempt to crack the bakery category where Mars’ presence to date has been negligible.

The UK is one of Mars’ biggest bakery markets, but even here the company only takes about three per cent with its Tracker and Twix bars.

McVitie’s marketing director Garry Biggs concedes that the chocolate biscuit bar sector is not performing well. However, he claims that since the Mintel report was published, the total biscuit category has experienced its highest growth levels since 1998 and increased by 3.9 per cent year on year to the end of 2002.

“This growth performance outstrips other traditional snacking categories, including confectionery,” Biggs adds. “In 2002 the McV brand identity formed the centrepiece of McVitie’s biggest marketing programme to date. This activity, combined with a &£6.5m advertising campaign, means that McVitie’s best-selling product lines – Chocolate Digestives and HobNobs – are showing double-digit growth for the first time in five years.”

Masterfoods’ decision to move into the chocolate biscuit bar sector, which is characterised by aggressive promotions and well established brands, will hardly be an easy ride for the company. But bisc& brand manager Ian Whitney insists that the new launch can buck the trend.

“The top brands take about 60 per cent of the market and have 100 per cent grocery distribution,” Whitney says. “There hasn’t been a new brand since the launch of Fox’s Rocky, which is about ten years ago. What you get at the moment is a huge promotional battle.

“Masterfoods’ strength is its brands. Over the past three years we have taken it successfully into other areas such as Celebrations and ice cream.”

Whitney predicts that the allure of Masterfoods’ brands dressed up under the bisc& brand will help to develop the category as it has done in other big biscuit-eating nations such as France, Germany and Ireland. The aim, he says, is for the bisc& brand to become a top five chocolate biscuit brand within a year.

Alistair Swanson, a partner at The Webb Partnership, a consultancy which focuses on brand innovation and new product development, thinks bisc& will be a success because people are returning to indulgence purchases.

“What’s clever is that it has automatically got the next range extension built in because of the name. What’s to stop them bringing in their other confectionery brands?” says Swanson.

But supermarket buyers say rival companies are relaxed about the new entrant. “I haven’t seen anything big planned by anyone else to counter it,” says one. Masterfoods’ confectionery rivals Nestlé and Cadbury say they are not planning any me-too strikes at the moment, but they will no doubt be watching, waiting to see if the format is worth copying.