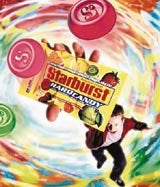 Masterfoods is launching a functional sugar-free sweet called Aqua Drop, which will be marketed as a hydrating, refreshing sweet for adults. It is the first time the company has launched a sweet aimed specifically at adults.

Aqua Drop, to be launched next year, will be supported by a &£2m advertising spend that will include a television campaign. The sweets will be available in apple and lemon flavours and are aimed at consumers that do not like mints. It is understood that research carried out by Masterfoods has shown that about half of UK consumers do not like mint products.

Masterfoods already has a presence in the children’s sugar confectionery market with its Skittles and Starburst ranges. Starburst was revamped and new flavours added earlier this year.

The positioning of the Aqua Drop is reminiscent of Masterfoods Opal Fruits, which was marketed as a mouth-watering sweet before it was rebranded as Starburst.

It is understood the confectionery giant will be relaunching White Maltesers as a permanent line in February next year, after early signs that the product has been successful with consumers. The product, which was launched last month, will also be extended to an egg range for the Easter season.