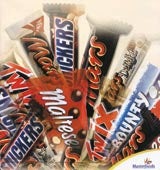 It is believed that he will remain with the Mars-owned company, although it is not known what position he will take on.

A replacement is thought to have been appointed and will report to European media manager Julie Steward.

Masterfoods spends £52m across all its UK divisions, including confectionery, food and petfood. It uses both MediaCom and Zenith Optimedia in the UK.

Smith has been an outspoken supporter of television as an advertising medium. At this year’s Marketing Week TV conference held in Paris he said: “Finding consumers is getting tougher, but at the moment we like television because it does have mass-reach.”

Earlier this year, Masterfoods UK announced that it was planning to shed 700 jobs in the UK (MW March 17). It was not clear how many jobs were set to go from marketing and sales, although both functions are understood to have been affected.

The restructure also extended to Europe, including Germany and France, and involved more than 11,000 employees.

At the same time the company said it was consolidating its UK manufacturing in Slough, closing one chocolate factory and investing in the other. It is also establishing innovation centres in Slough and Birstall in Yorkshire.