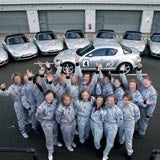 Is this the Witness Relocation Programme’s annual day out? Or a publicity photo from MI5 staff’s latest car-buying spree? Sadly it’s neither. Pictured and pixelated are the contestants from the Formula Woman Championship, the UK’s first all-female motor racing event championship, which Mates condoms has agreed to sponsor.

Les Dawson fans will be disappointed that the Diary is going to refrain from the obligatory “women driver” jokes. The Diary thinks the competition and the condom manufacturer’s sponsorship are a good idea, and in light of this deal, is looking forward to seeing the ladies, ahem, burn some rubber.

But why the secrecy over who is taking part in the championship, which will be aired on ITV1? Are Rebecca Loos and Victoria Beckham to be pitted against each other? Will Jensen Button be donning a pair of false breasts and a dress in an attempt to finally make it to first place on a podium (though the Diary still wouldn’t put too much money on him)? Will publicity junkie Jordan be making an appearance? At least her car won’t require air bags.

Regardless, it can’t be as dull and predictable as its flagging male counterpart. And its viewing figures will be more reliable.