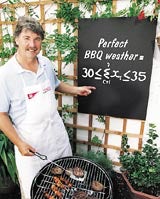 A trip to the supermarket isn’t the world’s biggest thrill. The average person would rather be elsewhere, but as the shopping has to be done they’d generally much prefer to go in, buy the goods and then leave. No fuss, no hassle, just a straightforward exchange. Most supermarkets would strive to help us achieve this, but not Tesco.

The supermarket chain would much rather make that weekly trip a mathematical nightmare. Why? Well, the barbecue season is upon us, and the Smart Alecs at Tesco thought they’d take full advantage.

Tesco and Ross Frozen Burgers have teamed up with BBC Radio 5 Live weatherman and subject of a top 40 hit (remember the Tribe of Toffs, anyone?) John Kettley to devise one of the most confusing and inappropriate algebraic equations imaginable.

The Diary is told it is used to work out whether or not a certain day is ideal for a barbecue, thus saving customers the trauma of looking out of their windows and deciding there and then whether or not to have one. Presumably Kettley understands that we wouldn’t trust the weather forecast though…

While a foolproof arithmetical prediction method could be helpful, come on: who in their right mind, other than Carol Vorderman perhaps, would stand in a supermarket and try to figure out a formula of 30< xi;< 35 from I=1 to I=7? And more to the point, by the time we’ve done so it’ll probably be well past dinner-time anyway.