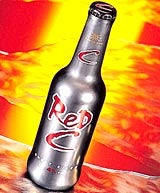 Matthew Clark is relaunching its sweet cider, Red C, with a “contemporary” design. The move comes less than two years after it was first launched in the on-trade arena.

The idea behind the redesigned bottles is to set the brand apart from traditional ciders, allowing it to compete with other premium packaged alcoholic drinks targeting 18to 24-year-olds.

Since its launch in 1999, Red C has seen volume growth of 271 per cent nationally and 71 per cent in the Tyne Tees region – which accounts for over half of all sweet cider sold in the UK.

The relaunch is part of a major investment in the brand, which has included sponsorship of Party Nights, a TV series following the antics of a group of young people in the Tyne Tees region.

D’Arcy, which created the original Red C launch campaign, is understood to be working on an ad campaign incorporating the new design, to break later this year.

She says: “We worked hard to establish Red C as a stylish brand capable of offering something modern that would appeal to sweet cider drinkers.

“I am confident the new design will build on this premium appeal and continue to show Red C as the brand driving development in the sweet cider market.”