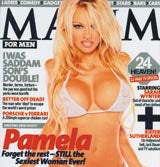 Loaded, the original lads’ monthly publication, has steadfastly held second place in its sector behind EMAP’s FHM, according to Audit Bureau of Circulations (ABC) figures. However, the new set of figures for the period July to December 2004, to be posted on February 17, will show Loaded slipping behind Dennis Publishing’s Maxim.

Maxim appointed a new editor, Greg Gutfield from California, in April last year and he has been tweaking the editorial content to rely less on the usual “babes and beer” fodder of men’s magazines.

Observers suggest that the combination of the revitalised Maxim and cannibalisation by the weeklies have undermined Loaded’s circulation.

IPC launched Nuts in January last year and its debut average net circulation figure, for the January to June 2004 period, was 290,337. Rival Zoo, from EMAP, posted a figure of 200,125.