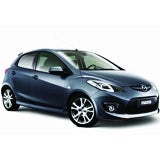 Until the summer Google had kept Google Images free of ads, but is now trialling a range of formats in the US and the UK.

Automotive brand Mazda is currently running a campaign for the Mazda 2 via a leaderboard at the top of the image results page. Brands including Converse have used the format in the US since its rollout earlier this month.

In the summer Google revamped Google Images and introduced text and image ads, served via AdWords, for certain results.

Speaking on the Google AdWords blog, Nathania Lozada, part of the Inside AdWords team, says: “Advertising on Google Images allows you to reach hundreds of millions of users around the world who use the site to find relevant photos and images every week.”