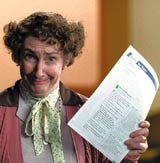 The agency beat Lowe, DFGW, and incumbent D’Arcy to the business. D’Arcy was appointed last June for a project to promote the self-assessment business. The agency replaced Euro RSCG Wnek Gosper.

D’Arcy’s work featured Father Ted character Mrs Doyle in an attempt to move the Inland Revenue away from using Hector, the cartoon taxman, in its ads.

Although the Mrs Doyle ad was widely regarded as annoying, it did increase the number of self-assessment forms returned on time, for the first time in five years.

The appointment of Miles Calcraft Bigginshaw Duffy will not affect M&C Saatchi’s brand development work for the Inland Revenue. The agency was appointed last June, along with design consultancy Corporate Edge, which is creating a simplified logo.

Self-assessment was introduced in April 1997. Under the system, about 9 million people, including the self employed, company directors and high earners, have to work out their own tax obligations.