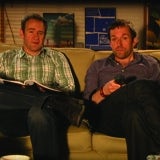 The series of clips entitled “4FilmsFor…” supports the Wedges’ “perfect for sharing” strapline and will feature the comedy duo in a variety of common home scenarios, referencing films such as Zoolander and Terminator 2: Judgment Day.

There will be 10 sketches in total, with two released on Film4 each month from Christmas day (December 25) until June 2011 when the campaign comes to a close.

The TV campaign will be supported by an on-pack promotion, running next year from March until June, asking customers to submit their four favourite films for sharing.