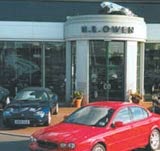 Luxury car dealership HR Owen has appointed full-service agency NMI to handle its &£3.5m advertising business and is considering advertising on television for the first time.

HR Owen, which handles 30 marques including Rolls-Royce, Bentley, Lamborghini, Maserati and Volvo, appointed NMI after a pitch against seven undisclosed agencies. The appointment was overseen by operations director Barry Green.

Green says that the company will be discussing opportunities for regional television campaigns with NMI shortly. He adds that HR Owen, which has 250,000 names on its database, will also be developing more direct marketing campaigns.

The company reported a pre-tax profit of &£2m in the year to March 21 from &£1.8m in 2001. Turnover rose six per cent to &£529m. Recent growth includes the addition of a Mercedes’ franchise dealer in Sussex.